It’s funny how a single missed message can wreck a havoc in one’s life. You need to send an important message to someone sometime later in the day, and you are so sure you will send it at the right time. Only, when the right time comes, you forget to send it. Depending upon the importance of the message you forgot to send, you may suffer anywhere from nothing to a concussion. If only there was a way to schedule your messages, as you could do with your emails. Well, if you are using an Android phone, you can. Whether you want to schedule a message to that special someone, or just want to send a reminder text to your friend to make sure he reaches on time, this feature will always come in handy in such times. So, if you are suffering from the “forgot to send the message” syndrome, here’s how to schedule text messages on Android in 2019.

Schedule Text Messages on Android in 2019

To schedule a text message on Android you can use two methods. The first involves the use of third-party apps which can be used to schedule text messages on any Android smartphone. The second is to use the built-in functionality that certain Android OEMs like Samsung, Xiaomi, and LG offer. We have included both these methods so you can skip to the section you want to read.

There are some OEMs which include this feature natively in their smartphones, but for the most part, you will have to use a third-party app to make use of this feature. The advantage of using third-party messaging clients is that not only they bring the feature of scheduling text messages but also include a ton of other features which makes messaging fun and easy. The apps will bring theming capabilities allowing you to change anything from colour scheme across the app to the fonts and its sizes. The only thing to remember is that we are focusing on scheduling messages hence other specific feature sets will not impact the ranking of the apps.

Textra is one of the most popular third-party messaging apps available on the Play Store. Although the app is known for giving the users the ability to customise the look and feel of the messaging app, it can also perform a lot of cool functions which your native messaging app cannot. One of those features is the ability to send scheduled messages. To schedule a message using Textra, when you are composing a message, hit the plus button and tap on the clock icon as shown in the figure. 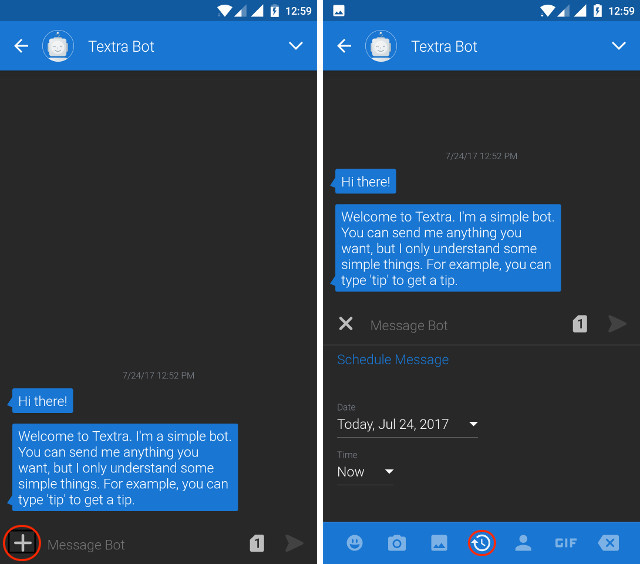 Here, you can select the Date and the Time when you want your message to be sent from your phone. One neat thing I like about Textra is that it marks the scheduled messages with a green clock icon. When you tap on the icon, you will be able to see the time stamp (when it is scheduled to be sent) for that message. For the most part, the app is free to use with in-app purchases to unlock some extra features. 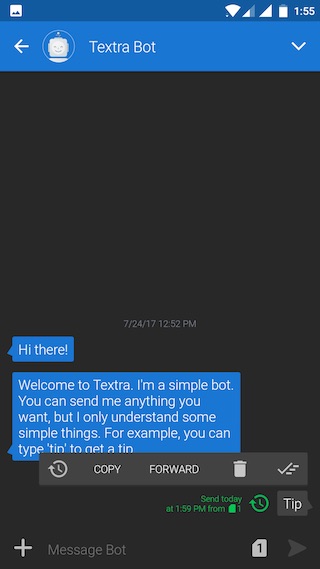 Pulse SMS is one of the few messaging apps which are really innovating the way people use regular messages. The app brings many cool and unique features which can enhance your messaging experience. One of those features is the ability to schedule text messages. To schedule a message, when you are in a conversation, tap on the 3-dots menu present at the top right corner of the app. On the drop-down menu, tap on the “Schedule a message” option and then enter the date, time, and the content of the message. When you are done, hit send. 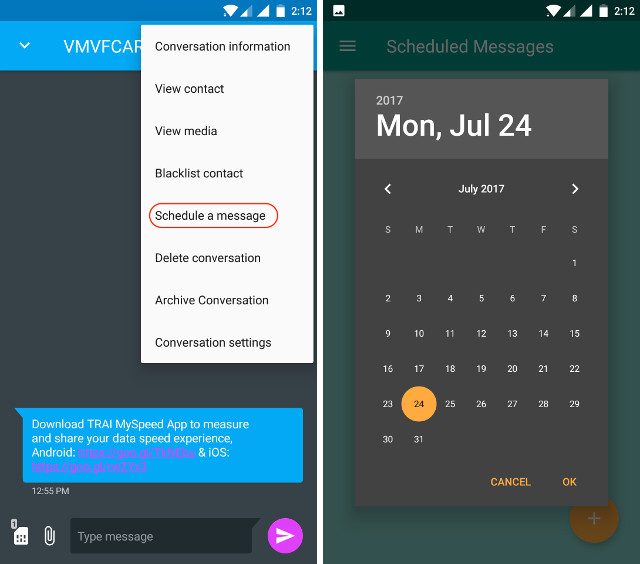 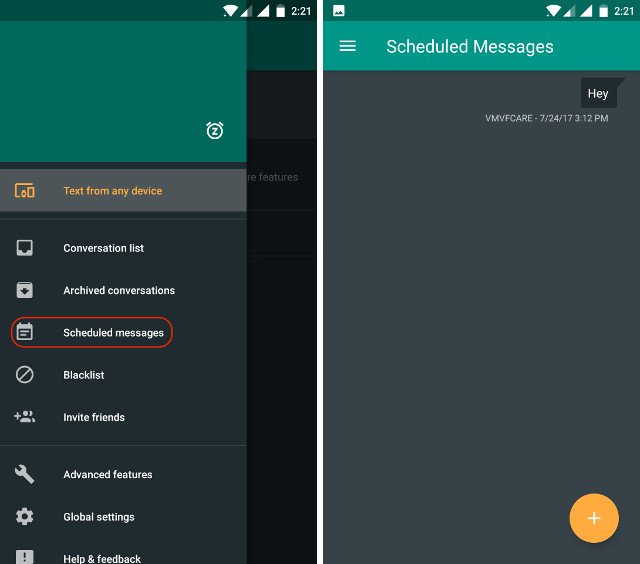 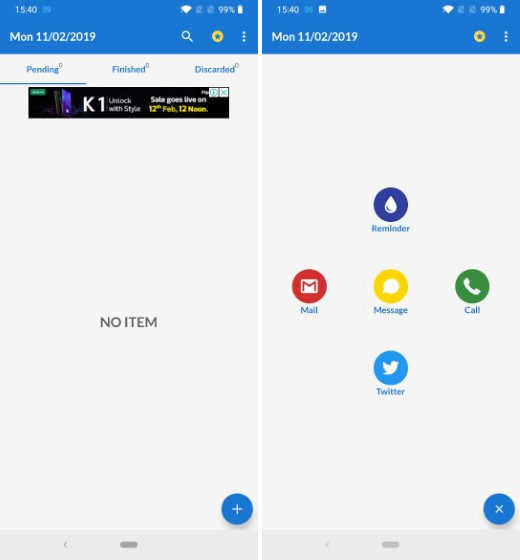 Once you do that, you can add contacts (single or multiple) and draft your message. Below, you can either decide the exact time of the message or select a time range. Finally, you can set the message to repeat. The time range feature is especially useful if you are sending repeat messages as it sends the message at a random time so that they don’t see automated. There’s also a button which once checked will ask your permission before sending the message. The app is completely free to use with ads with an in-app purchase option to remove them. If you want all these features, definitely try the app out. 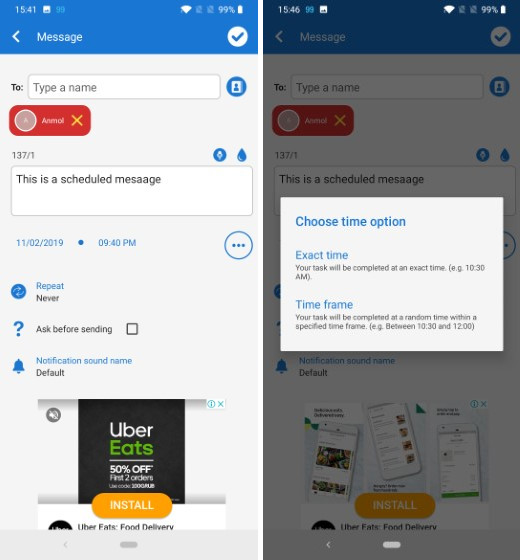 If you like your stock Android Messaging app and don’t want to switch to another app, you can use this app as an add-on, as this is only used for sending scheduled text messages. To schedule a text message, launch the app and then hit the plus button to start composing the message. Here, you can schedule a message by assigning the date and time to it. The app is very light and quick. However, the UI does feel a little old. The app is free to use with ads. But, the good thing is that you will only see the ads once you hit the send button. 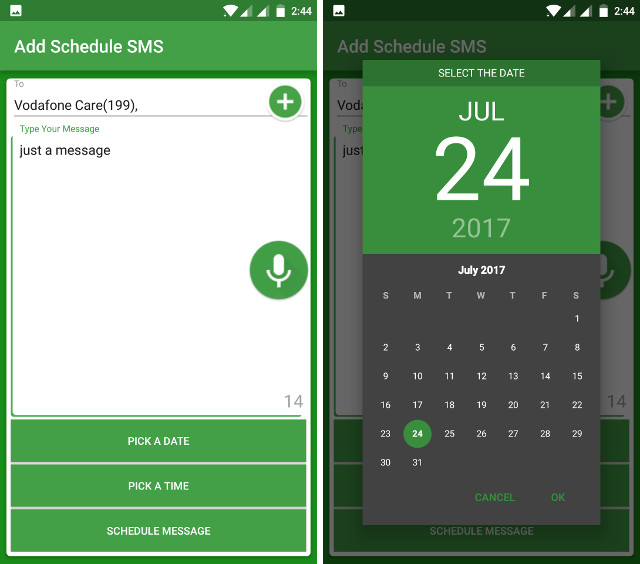 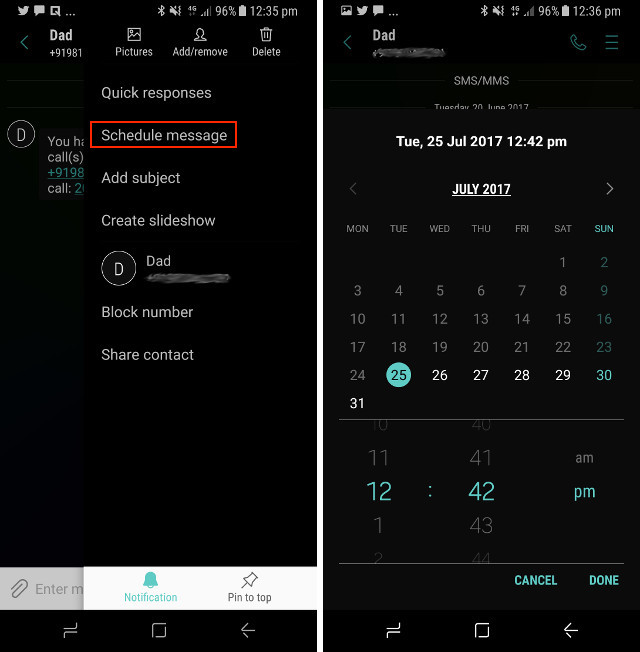 To check if your smartphone has this feature or not, open any message or conversation inside the native messages app, and tap on the 3-dots (options) menu on the top right corner. You should see an option to send scheduled messages if your handset supports it. For example, on my Samsung Galaxy S8, when I tapped on the options menu inside a conversation, I got an option to create a schedule message. The picture above depicts the same. 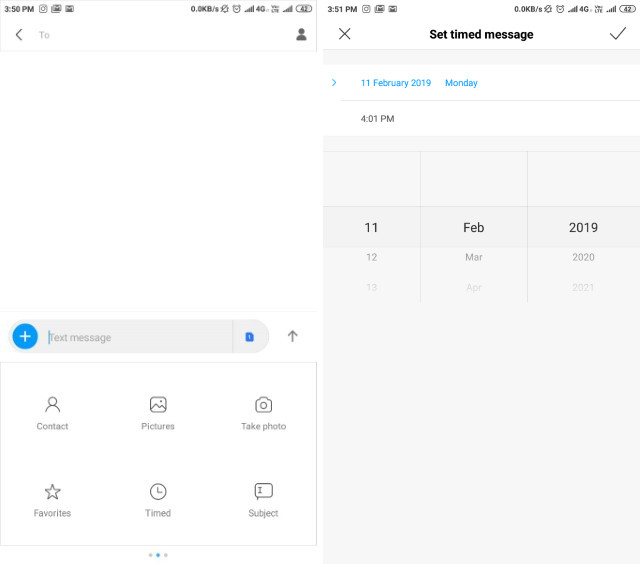 Xioami does it a little bit different. Instead of hitting the three-dot menu at the top right, you will need to hit the “+” button beside the compose window. From here, you will select the “Timed” option to schedule your message. If you cannot find a scheduling option on your Android device by either of these methods, you can do a simple Google search and you will find if your OEM supports it or not. Or you can just use any of the above-mentioned apps to schedule messages.

SEE ALSO: How to Schedule WhatsApp Messages on Android

I cannot tell you how many times I have used this feature to save myself. The human brain (at least mine) has a tendency of forgetting things when it’s the right time. Use this app to solve the forgetfulness problem and schedule text messages on Android to deliver them on time. Share with us your stories, when you forgot to send someone an important message at the right time. Also let us know if you know a better app which does the same but is not on the list, in the comment section below.