The Facebook-owned WhatsApp Messenger is undoubtedly the most popular messaging app on the planet. The company has been bringing new updates every now and then, to make sure that it remains at the top of the hill. However, not everyone seems to be happy with WhatsApp. Firstly, WhatsApp now shares user data with Facebook, which hasn’t gone down too well with users. Then there’s the fact that everyone uses WhatsApp these days, so we won’t blame you if you feel it’s a little bloated. So, if you are someone who wants to move on a more secure or personal messaging app, here is a list of the 7 best WhatsApp alternative apps you can use:

Telegram Messenger has been known as the best WhatsApp competitor for a while now and nothing’s changed. The open-source messaging app is still the best WhatsApp alternative out there and unlike the yesteryears, it’s because of some really cool features it packs. Along with the usual messaging features that that both WhatsApp and Telegram pack, the latter differs from the former with features like super groups of up to 5,000 people, public channels, usernames, ability to share files of up to 1.5 GB, passcode lock, self-destructing messages and end-to-end encryption in secret chat etc. Then, there are Telegram Bots, which really enhance the experience. The bots not only bring you important info on the go but there are several game bots that let you play games inside the messaging app. 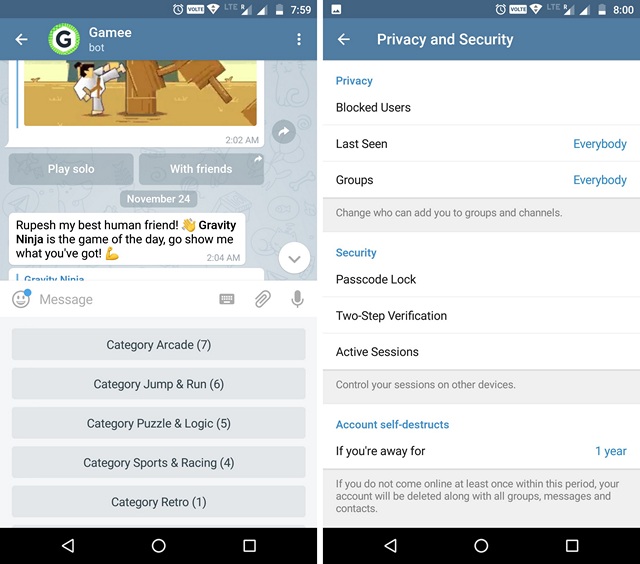 Other than that, unlike WhatsApp, Telegram can be used on multiple platforms at once, so you can start texting on your phone and then continue it on your PC. While Telegram lacks features like voice and videos calls, it makes up for them with some really unique features. So, if you don’t care about calls, you cannot go wrong by choosing Telegram Messenger as your messaging app.

If you are a looking for a fresh new messaging app, you should give Wire a shot. The app has gaining a lot of accolades among users, due to its beautiful interface and unique features. The app does have a gorgeous interface and in a world where most messaging apps kind of look the same, it’s a pleasant surprise. It might be fairly new but it’s already very feature rich. The open-source app brings end-to-end encryption to everything you send inside the app, while also letting you to use it on multiple devices at once. 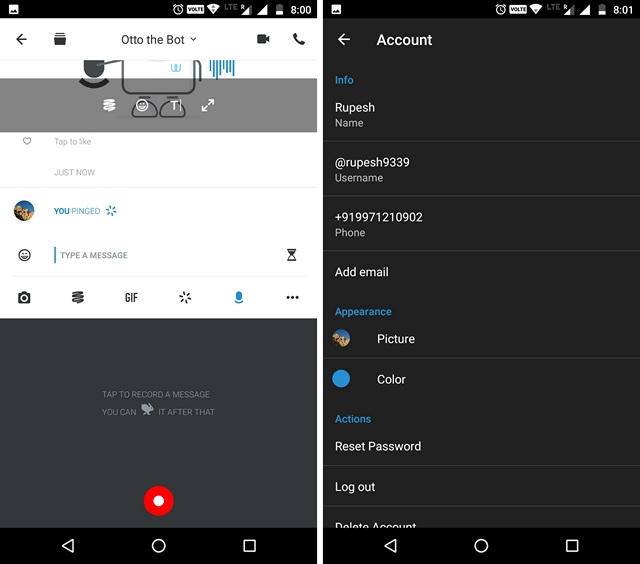 Wire also brings a number of unique features like group video calls (up to 10 people), timed aka self-destructing messages, ability to delete messages from recipient devices, link previews and more. If you ask me, Wire maybe fairly new but it’s definitely one of the best WhatsApp alternatives out there.

Allo is a fairly new messaging app from Google and while it hasn’t really made much of an impact, it’s still a viable WhatsApp alternative. No prizes for guessing the best feature in Allo, it’s obviously the brilliant Google Assistant. The integration of Assistant, albeit in chat form, really enhances the experience on Allo. In Allo, you can use Assistant to get information on weather, flights, news, nearby places, or anything else you’d like. You can also use it to set alarms, reminders, navigate to places, play games and more. The advantage in Allo is slightly negated with Gboard bringing similar functionality in WhatsApp and other messengers, Google Assistant is still a whole lot better. Other than Google Assistant, Allo brings Smart Replies, Incognito Chats with end-to-end encryption and self-destructing messages, stickers etc. 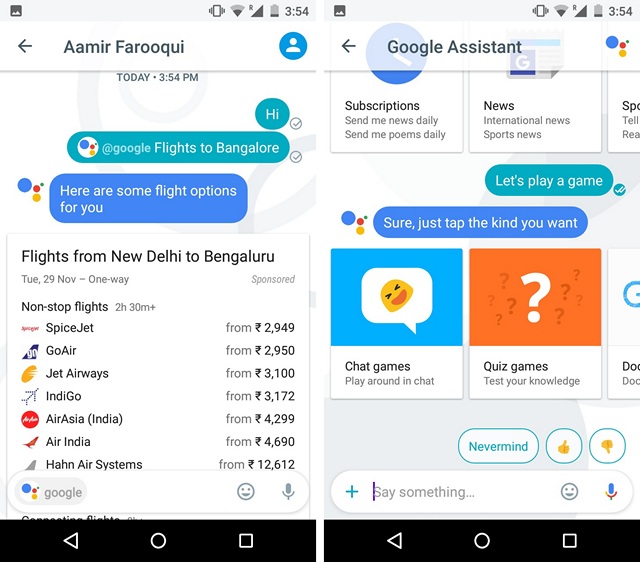 The positives in Allo are certainly interesting but there are a number of drawbacks too. The most important feature that Allo lacks is the ability to backup chats, which is a shame, considering WhatsApp lets you backup chats on Google Drive. Then, Allo also lacks the ability to make voice or video calls, last seen, statuses and the ability to share files. If you can live with these annoyances, Google Allo should make up for a decent WhatsApp replacement.

Open Source Systems, the company that powers the end-to-end encryption technology in WhatsApp Messenger and Facebook Messenger, offers its very own messaging app dubbed Signal Private Messenger. As you’d expect, Signal brings a number of security benefits when compared to WhatsApp. Unlike WhatsApp, the open-source Signal app offers self-destructing messages, screen security (prevents anyone from taking screenshots), and more. Plus, Signal brings encryption to its backups, calls and every other data in the app. 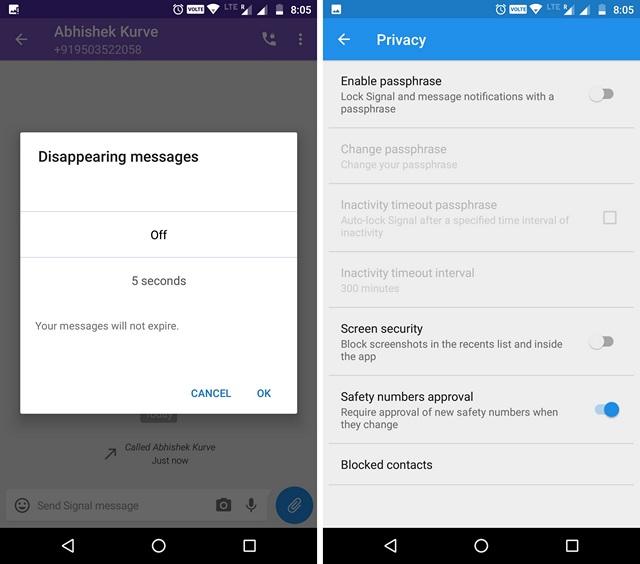 Signal also includes most of the messaging features including support for SMS but lacks video calling, file sharing and cross-platform support. Overall, Signal Private Messenger is for people who are looking for a simple and secure messaging app.

Viber is another popular messaging and VoIP app that really stands toe-to-toe with WhatsApp when it comes to features. Firstly, the app offers end-to-end encryption in calls, messages and the shared media. Moreover, the messages saved in multiple devices are also encrypted, which brings us to the fact that the messaging apps packs in multi-device support, which WhatsApp lacks. Like WhatsApp, Viber lets you make video and voice calls but the app goes one step ahead with its Viber Out feature, which lets you make international calls to non-Viber users at nominal rates. 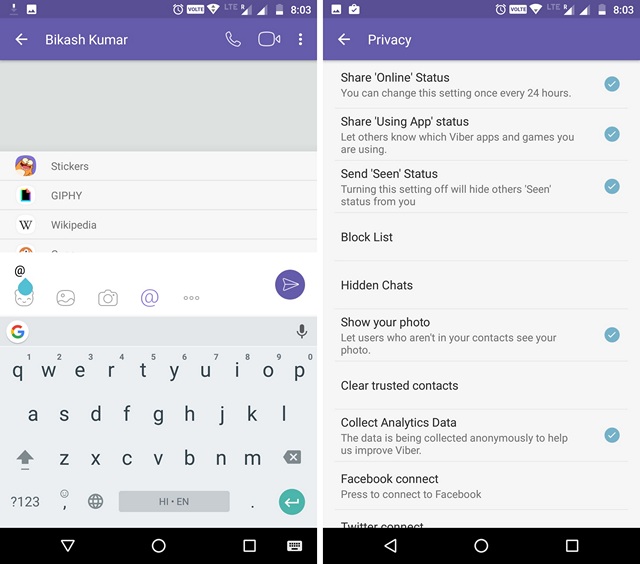 Talking about the messaging features, Viber includes support for stickers, file sharing, last seen, voice & video messages, public accounts, backup to Google Drive and more. There is also a sticker store and Viber games, which are basically games you can play inside Viber.

If you considering everything, you’d notice that Viber is an app that is very similar to WhatsApp. It packs in most of the features from WhatsApp and then some more.

Threema is a “seriously secure” messaging app, which should interest you if you are concerned about your security on WhatsApp. The app encrypts all the data, like the messages, shared files, and even status updates. While it lacks WhatsApp features like voice & video calling, its security features are certainly impressive. Along with end-to-end encryption in the app, the app does not collect metadata and offers various encrypted backup options. Threema is open-source and has a very transparent privacy policy, so your security is in safe hands while you are using the app. 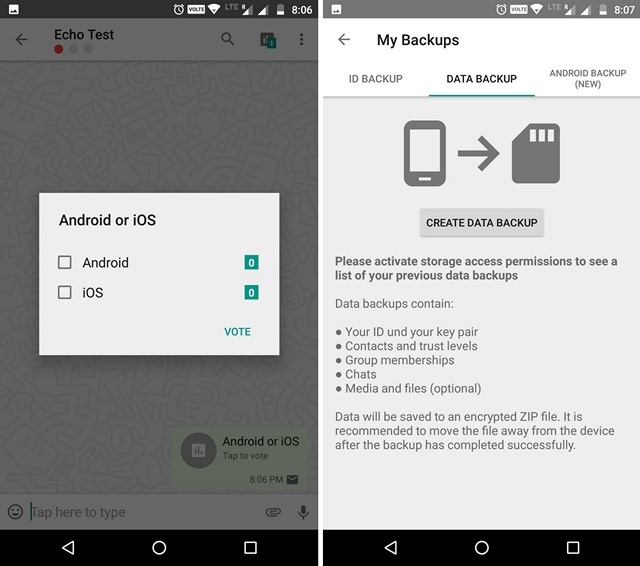 It packs in the usual messaging features, along with a web client that works similar to WhatsApp Web but includes a few unique touches like the ability to create a poll in groups, password or fingerprint-protect chats, anonymous chatting (no number required), and the ability to agree/disagree to a message. Threema is a paid app but if security is important to you and you want a simple messaging app, it is worth the money.

Another WhatsApp alternative you can use is LINE, which is a highly popular cross-platform messaging app that packs in a ton of features. Like WhatsApp, the app features end-to-end encryption, support for voice and video calls & messages and more. It also brings quite a few unique features when compared to WhatsApp like LINE Out (lets you make international calls to non-LINE users), sticker store, a cool Keep feature (lets you save your favorite messages, photos etc.), and more. It also features a timeline in the app, where you can see any status updates and photo changes from your friends. 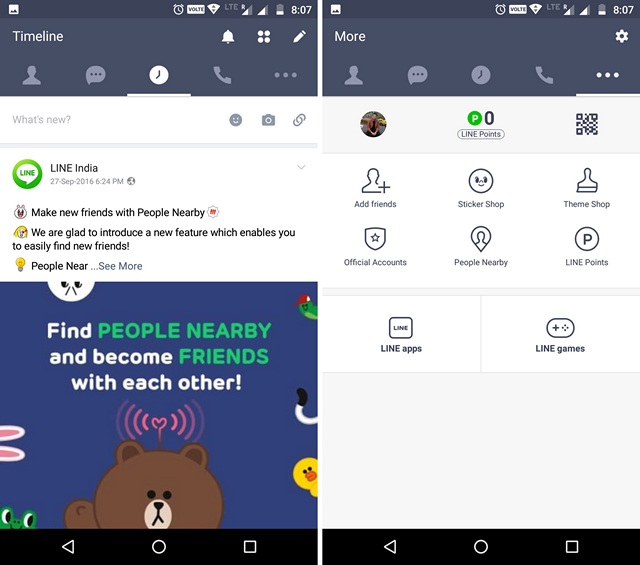 Other useful features of LINE include passcode lock, filter messages, themes, LINE Pay for payments, and more. There’s no doubt that LINE is a very capable and feature-rich messaging app, however, it does feel a little bloated. So, fans of WhatsApp’s simplicity might not like LINE much but if you aren’t bothered by that, you should give LINE a shot.

The Best WhatsApp Alternatives To Use

There are a ton of other messaging apps that are pretty decent, like imo, Facebook Messenger, Hike etc. However, if you are looking for an app to replace WhatsApp, the aforementioned apps are the best ones you can use. While none of these apps will match the user base that WhatsApp boasts of, these apps should be good enough if you can get your friends to use them. So, try out these WhatsApp alternatives and let us know your favorite instant messaging app in the comments section below.