Games are now played at a competitive level where each move counts and is crucial. One of these competitive genres is the fighting/arcade style. Many players spend day and night to perfect their skills in fighting games. Many of these players opt for an arcade stick or fight stick as their weapon of choice in the fighting world. Well, what is an Arcade Stick? An arcade stick is a joystick controller with buttons and extra functionality, just like you will find on arcade machines. If you don’t have the best fight sticks, you can kiss your winning chance a good bye.

Note that just the best arcade sticks/fight sticks won’t make you some expert in any particular game overnight; there is no shortcut to working hard. Instead, arcade sticks are for the player’s comfort and flexibility, especially when playing fighting games. Most players choose to play and practice on these fight sticks, as a stick provides more tactile feedback, and to some, is a nod to the classic fighter games of arcades. So, whether you are a professional looking for an upgrade, or just a beginner looking to start out on arcade sticks, here are the 10 best Fight Sticks for fighting games you can buy.

Best Fight Sticks (Arcade Sticks) You Should Buy in 2019 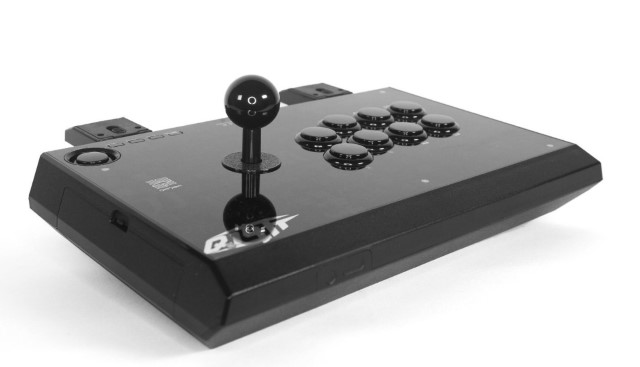 Qanba Q1 is a really good entry level fight stick which is compatible with both Play Station 3 and Windows PC. The fight stick comes with a single Qanba joystick and eight Qanba buttons. The Qanba Q1 features a plastic construction which doesn’t feel cheap. It also sports rubber pads at the bottom which allows it sit firmly on table and your lap. I also love the adjustable and removable cable clamp which makes the set up clean. The Qanba Q1 also comes with different stick gates including square gate, hex gate, and circular gate, allowing you to fit any stick that you want to use.

When not in use, the cable can be easily stored in the built-in storage which is a nice thing. The Qanba Q1 is designed to be modded and a single Google search will give you access to all the necessary resources. You can even replace the sticks, buttons, ball top, and other hardware parts to make it your own. The only drawback here is the attached USB chord which is a little shorter for my test. Other than that, it’s a perfectly good arcade stick which you should buy. 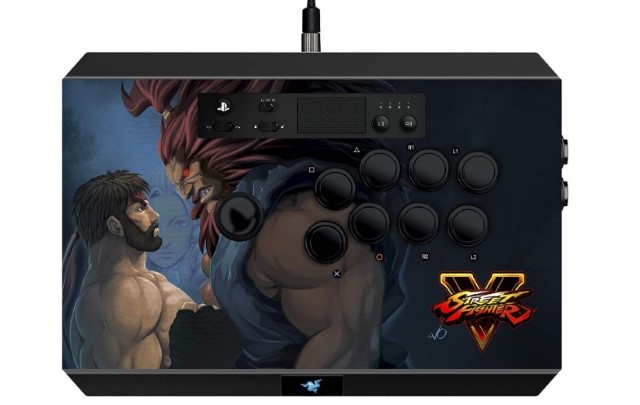 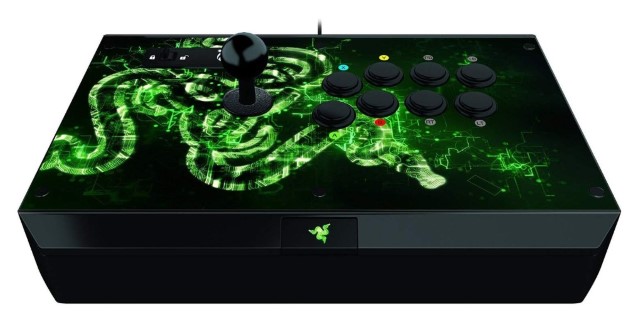 There are ten highly tactile buttons along with an 8 way joystick which is something that you don’t find in budget arcade sticks. I love that they both come with internal storage chamber which can be used to store the detachable screw-lock cable, screwdriver, and two extra buttons. The Panthra is fully modular allowing users to change the buttons and joystick if they want to. They both are compatible with most major fighting games allowing you to play games of your choice. If you want an arcade gaming experience, this is the fight stick that you should buy. 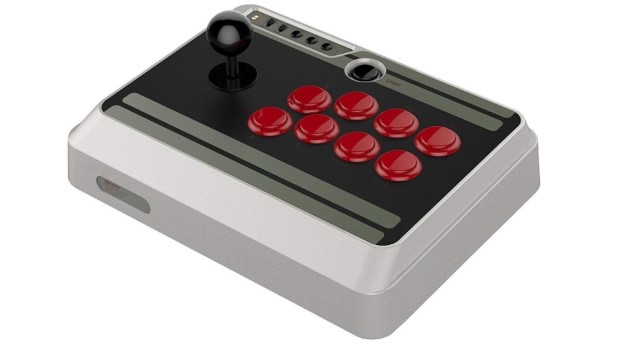 If you are fan of Nintendo games that you will enjoy this arcade stick. I still remember my first Mario game which I played using an arcade stick and this sure does brings those memories back. The 8Bitdo stick is compatible with not only Nintendo’s latest console, the Nintedo Switch but also with Nintendo games that you can run on PC, Mac, and Android devices. Apart from its features my favorite thing about this arcade stick is its looks. Just look at it, it looks like any old Nintendo hardware and I love it.

Talking about its features, the 8Bitdo N30 brings both wired and wireless connectivity. You can connect it to your system either using a USB cable or Bluetooth. It comes with one joystick and eight switches which are mod-friendly. It brings both D-Input and X-Input functionalities along with turbo and d-pad modes. If you love Nintendo, you should check it out.

The Mayflash F500 is the successor to the Mayflash F300. It is made up of a solid piece of metal with rubber feet and a good amount of weight to make it a durable fight stick. The F500 is an 8-button arcade stick with a reasonable joystick. Mayflash has designed the F500 with modding in mind. Each of the eight buttons can be swapped out to the player’s liking, even with genuine Sanwa parts, with the joystick being no exception either. The stock experience of the arcade stick is not bad either with the buttons being slightly convexed and light, and the joystick being responsive.

With it being $89 on Amazon, it does lack some amenities such as Sanwa Denshi Buttons, but the compatibility is exceptional. The arcade stick is compatible with PCs, PS3, PS4, Xbox 360, Xbox One.

The Madcatz alpha is an entry level arcade stick with basic functions and a decent build quality. The arcade stick has a small form factor and is made up of plastic with some rubber padding underneath to prevent it from sliding in the heat of the battle. The Madcatz Alpha is more aimed towards beginners looking for a starting point rather than professionals and comes in at around $80. This arcade stick is ideal for people who travel a lot due to it being lightweight and small in size. The Alpha does not come with Sanwa Denshi Buttons, but the normal buttons are decent when you get the hang of them.

If you are looking for the ability to mod this stick, then you will be disappointed to know that the parts are soldered to the board, and hence cannot be modified as easily as some other arcade sticks. The Madcatz alpha has limited compatibility, as only PS3 and PS4 are supported, but offers decent overall performance.

The HORI Arcade Pro 4 Kai is another highly used high-end arcade stick, with many features to back up its comparatively lower price of about $145. This arcade stick is beautiful while maintaining a light weight despite the bottom being metal. The joystick is an original Hori Hayabusa, providing very fast and accurate inputs once mastered. The Arcade Pro 4 ditches Sanwa buttons in favor of Hori Kuro buttons, which are harder to master than Sanwa, but when mastered provide remarkable durability and response. 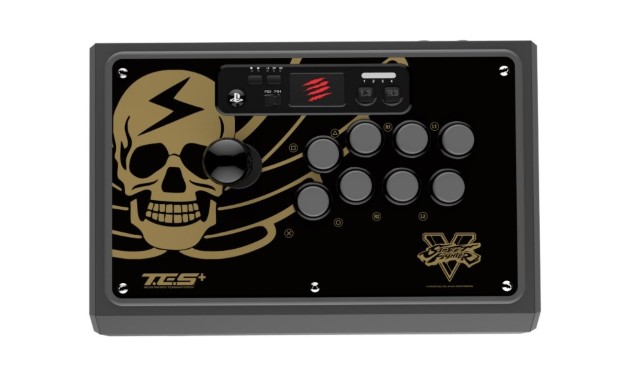 Madcatz cover all the different budgets, and the Arcade FightStick TES+ is certainly one of their high-end fightsticks. With a price tag of $130, this arcade stick is surely made for the enthusiasts who will utilize all the features this fightstick comes with. The Madcatz TES+ is a tournament edition fight stick made for competitive gaming. The build quality of the TES+ sets the bar high, with the fightstick being constructed of metal, plastic, and glass, with rubber for a good grip on the surface. The fight stick features an 8-button layout, like many other high-end arcade sticks with high-quality parts. Both the buttons and the handle are Sanwa Denshi parts, with the buttons being extremely responsive with a little resistance to make it ideal for fighting games.

It brings a 3-way button that enables joystick to emulate a left or right analog stick or D-Pad. I also love the 9.8ft/3m USB cable on this Street Fighter arcade stick which keeps me at a comfortable distance from your TV while enabling a low latency gameplay. Overall, this is a great arcade stick and you should definitely check it out.

The Hori Arcade Stick Mini is a great starter stick, compatible with the PS3 and PS4. It is extremely affordable, coming at about $40, and the overall experience is more than decent. This arcade stick is made up of plastic and has rubberized feet to prevent it from moving. Its build quality is remarkable for the price, with corners being cut at the right places for the reduced price. The plastic construction makes for an extremely light and portable arcade stick, which makes it great for traveling gamers. The footprint of the Arcade Stick Mini is also small, as implied by its name. The buttons are flat and wide, which offer good responsiveness and the handle is quite comfortable, albeit a little too small for people with large hands.

It is an 8-button arcade stick and also comes with turbo functionality. To sum things up, the Hori Arcade Stick Mini is a great bang-for-the-buck arcade stick, despite its low durability. 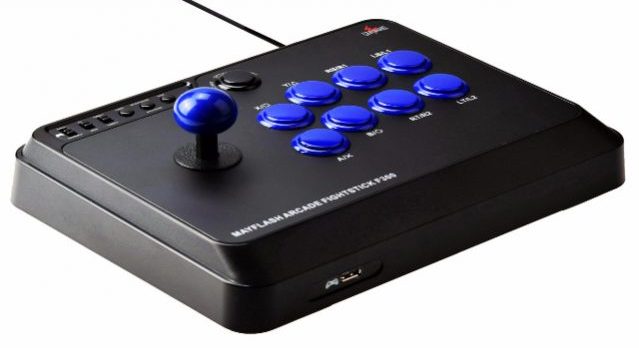 The Mayflash F300 is the predecessor to the Mayflash F500 but it’s still an amazing arcade stick, especially for beginners aiming to use it with multiple devices. The F300 comes in under $60 and offers a great experience. For the price, you are getting a nice 8-button layout, with some extra buttons on the top for turbo and changing the input of the arcade stick. The F300 hosts an all plastic body with rubberized feet for added stability. The affordable arcade stick is well constructed and does not feel cheaply made, although the buttons are a compromise here, as they are not Sanwa parts out of the box, with some modding, you can replace the stock buttons to any button of your choice – even Sanwa buttons. The buttons do provide an adequate response, with the handle being light.

The Mayflash F30 does not offer longevity, but the true beauty of this arcade stick is in its compatibility. It is compatible with every popular console out there, including the PS4, PS3, Xbox 360 & Xbox One, along with PCs running Windows 7 to Windows 10. 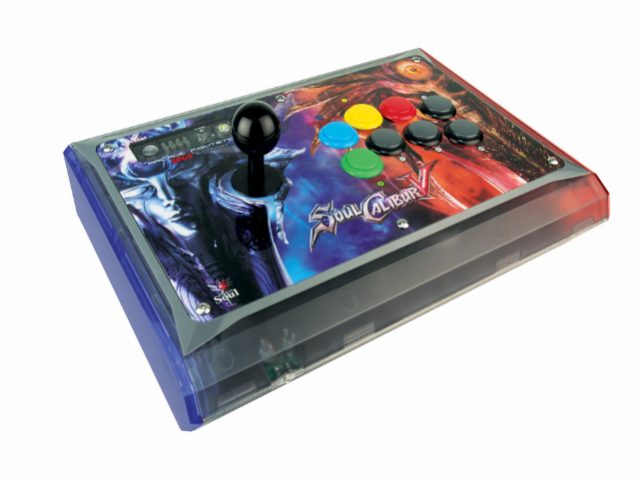 The MadCatz Soul Calibur V edition arcade stick is a work of art. The front plate has a beautiful art of Soul Calibur with a translucent finish, along with a Namco Noir button layout. It’s a high-end heavy fight stick one with a metal plate and rubber feet for stability. The buttons are all Sanwa Denshi parts with the superb responsiveness, and the clicking noise is minimal. It has an 8-button layout and has the start button on the side to prevent accidental presses.

The Soul Calibur V also comes with control buttons such as the turbo button, and the controller lock/unlock switch, which deactivates the buttons you do not want to use. This arcade stick can also be modified easily and packs in internal storage as well. The Soul Calibur V Arcade stick is a pretty stick with high-quality parts which makes it great in both form and function. The only drawback being that it is only compatible with either Xbox 360 or PS3 depending on the model.

The Best Fight Sticks and Arcade Sticks You Can Buy

If you are looking for an entry-level fight stick or a tournament edition stick, we have covered everything and then some. Choose the one stick that you like and play with it until you can pull-off every move in your favorite game. When it comes to fight sticks aka arcade sticks, it’s all about getting the hang of it. Also, feel free to mention your favorite fight sticks in the comment sections below.