Whether you’re a seasoned programmer, or a beginner trying to code your first piece of software, a good text editor is one of the most important things you’ll need on your Mac. Thankfully there are a lot of free text editors as well as great paid text editors out there. To save our readers from the time consuming (and often confusing) task of choosing the right text editor for their use, we’ve picked out the 10 best text editors for Mac that are actually worthy of  attention in 2019. Note that while all the Mac text editors mentioned on this list are great, you should choose the one that fits your needs. So, without further ado, let’s check out the list, shall we?

In this article, we are focusing on the best text editors for coding but if you are looking for a text editor for your writing purposes, you can check out our article on the best writing apps for Mac.

Sublime Text is probably one of the most famous text editors available for Mac and for all the right reasons. The software brings a ton of features including syntax highlighting and folding, a high level of customizability, easy to navigate interface, multiple selections, powerful API and package ecosystem, and more. One of the best features of Sublime Text 3 is the “Goto Anything” feature. As it names suggests, the feature allows you to instantly jump to symbols, lines, or words that you are looking for, and can be activated simply by hitting the keyboard shortcut ⌘P.

Combine this with features like split editing, Goto Definition, Command Palette, batch editing, and instant project switch and you have one of the best and most powerful text editors out there. Probably the only drawback of Sublime Text 3 is its cost. Just like any well developed Mac software, Sublime Text 3 boasts of a premium price. That said, since a text editor is going to be the foundation for your future work, investing up front in a good text editor is not a bad thing. If money is no concern for you, definitely check this out.

If you want a text editor which is as capable as Sublime Text but doesn’t cost a penny, then Atom is for you. Developed by the same minds which are behind the popular SVC service GitHub, Atom is an open-source software which is both modern and approachable and yet hackable to its core. Atom is built on HTML, JavaScript, CSS, and Node.js integration and it runs on Electron. Although the software is already feature rich, if you want more features, you can install any of its thousands of open-source packages to add new features and functionality. 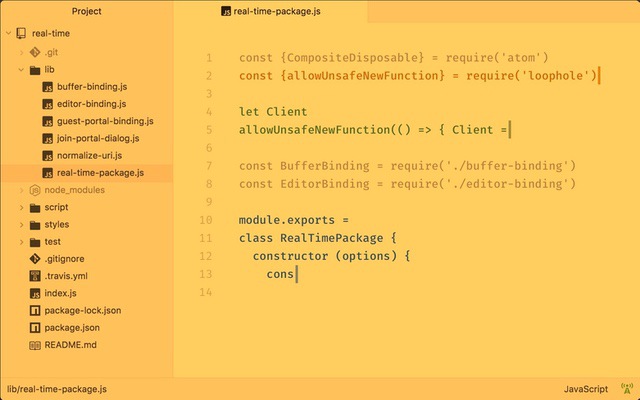 Atom is also highly customizable. If you want, you can change almost everything about it. You can install different themes to change its look and feel, you can tweak the  UI with CSS, and even add major features which fit your workflow using HTML and JavaScript. Atom allows you to create a working environment which complements your workflow and that is its biggest power. Also, it is completely free to download and use with no restrictions.

Another popular text editor for Mac is Brackets which mainly focuses on web design. Brackets is a better option for front-end developers and web designers than the ones mentioned above. While this text editor has been designed by Adobe, which is famous for its subscription pricing model, Brackets is a completely free text editor. Adobe has developed Brackets as an open-source project which is supported by its active and passionate community. One of the best features of Brackets is the “Live Preview” feature which allows users to see any changes that they make to the CSS and HTML of the code reflected live in a Chrome window. This feature allows developers to keep an eye on their code and stops them from making any drastic mistakes.

Since Brackets is an Adobe product, it works really well with other Adobe products. For example, there’s a feature called “Extract” which lets users automatically extract color, font, gradient, and measurement information from a photoshop document file. Brackets is already a feature-rich text editor, however, if you want to add more features, you can do so by using Brackets’ extensions which are free to download and install. Some of the most popular Brackets’ extensions are Beautify, Autoprefixer, Emmet, Minifier, Bracket Gits, and Brackets File Icons. If you are into web development, you should definitely try Brackets.

BBEdit is developed by Bare Bones software and is probably one of the oldest and most reliable text editors you can find on Mac. Not only BBEdit is used by thousands of developers out there but it is also used by many writers as the software provides features for editing, searching, and manipulation of prose, source code, and textual data. Some of the biggest features of BBEdit include built-in tools for text manipulations, Hard Wrap, customizable syntax coloring support for over two dozen built-in languages, placeholder options for easier site maintenance, multiple files manipulations, complete set of HTML Tools for fast, easy, and correct markup, extensive file handling capabilities, and more. 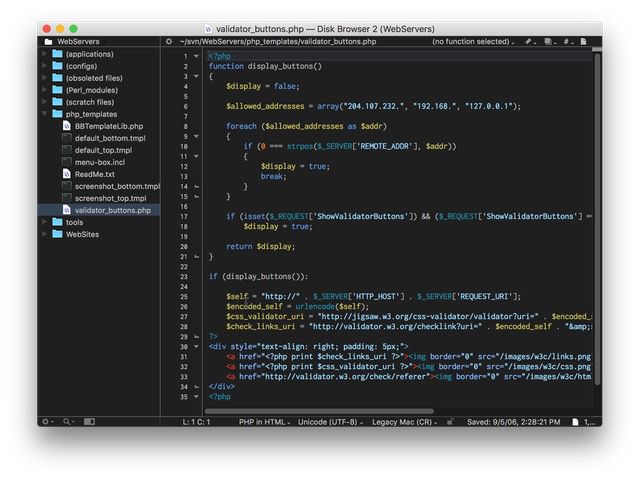 One of the things that is important when choosing a software like a text editor is its longevity. You don’t want a text editor which won’t receive any updates, or worse, get killed few years down the line. With BBEdit, you can be sure that it will never happen. The software has been available since 1992 which is longer than the existence of macOS as we know today. BBEdit’s existence of more than 26 years is an enough proof that the developers are not going to let this die. If you want a powerful text editor for web development which will be there for you for the next decade, definitely give this a try.

UltraEdit is one of the best and most versatile text editors for Mac out there. For starters, UltraEdit supports a ton of different languages including C, Objective C, Javascript, XML, PHP, Perl, Python, and more. Just like BBEdit, UltraEdit has been around since ages and is celebrating its 25 year’s anniversary this year. So reliability is not a concern here. The software brings tons of features including and not limited to themes support, support for large files (>4GB), syntax highlighting for multiple languages, multi-caret editing, multi-selection capabilities, a very robust search, integrated FTP, support for 4K and Apple Retina display, and more.

UltraEdit is a very capable text editor, however, if you need more features, you can buy it with other Ultra products like UltraCompare, UltraEdit Suite, UltraFinder, and IDM All Access, all of which bring additional features. Finally, do note that UltraEdit is not cheap and is one of the costliest text editors out there. However, there is a 30-day free trial which you can use to get a feel for the software before springing up the money. 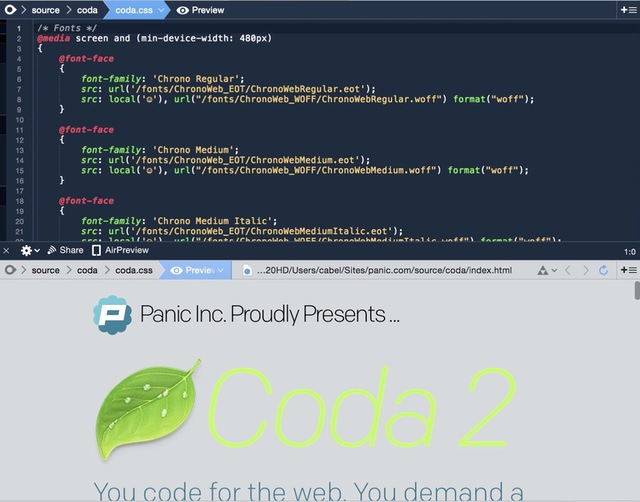 Coda 2 has recently launched a ton of new features. Now Coda 2 supports touch-bar on MacBook Pros, offers faster syntax highlighting and symbol parsing, indexing of local files, CSS overriding, and more. However, by far my favorite feature of Coda 2 is built-in WebKit Preview which includes a web inspector, debugger, and profiler. Using the WebKit Preview developers can see the real-time effect as their code changes. Also, like many other text editors on this list, Coda 2 brings an extensive set of plugins which can be used to further enhance its feature set.

Note: Panic, the company behind Coda 2, is creating a new text editor called Nova. Once Nova is officially released, Coda 2 users can seamlessly move to using it. Nova is basically a re-branded Coda 2 with enough new features to justify the brand change. You can sign up to test Nova here.

Although developed by Apple’s arch-rival Microsoft, Visual Studio Code is one of the best text editors that you can get for your Mac. The text editor is packed with features and has been optimized for Mac in such a way that you don’t feel any performance difference from its Windows counterpart. The main features of Visual Studio Code include the ability to highlight syntax for more than 30 different languages, lightning fast source-code editor, keyboard-centric code editing approach, automatic real-time API description, Git control, IntelliSense for smart completions based on variable types, Debugging support, and more. 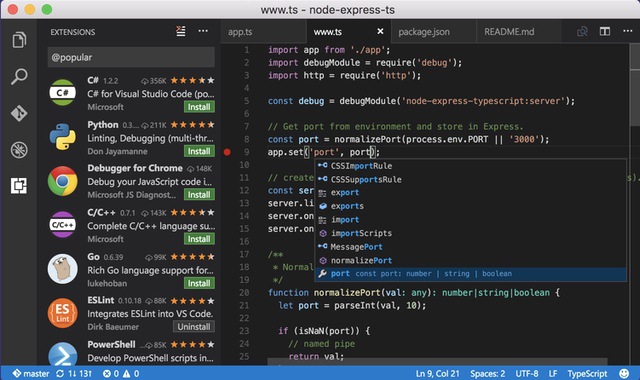 Visual Studio Code also comes with support for extensions and a big extension library which can be used to not only enhance its features but also customize the interface to suit your workflow. Some of the popular extensions are Git Lens, Sublime Text Keymap, Azure Storage, Angular Essentials, Vim, and Debugger for Chrome. Also, the text editor is completely free to download and use.

Textastic is one of the most affordable and user-friendly text editors for Mac that you can find. It is a powerful and fast text, code, and markup editor. Textastic supports syntax highlighting for more than 80 source code and markup languages. It also features auto-completion of code for HTML, CSS, JavaScript, PHP, C, and Objective-C languages. I also love that the text editor allows users to work in multiple tabs making it easier to review or consult your own code. Other features include the ability to quickly find files, print files, use symbol list to quickly navigate in a file, built-in Emmet support and more. 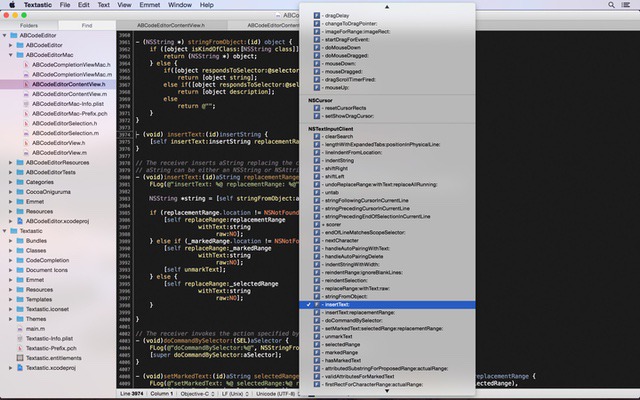 It might not be the most powerful text editor for the Mac, however, it is fairly capable. Also, its easy to understand user interface ensures that you have a less of a learning curve here  than with some of the other text editors on this list.

TextMate bridges UNIX underpinnings and GUI by cherry-picking the best of both worlds so that it can be used by experts and novices alike. It brings enough project management features to keep most users happy, but is otherwise very lightweight and has a clean and minimalist GUI. Features of TextMate include the ability to research and replace the code in projects, auto-pairing of brackets and other characters, column selection and typing, recordable macros with no programming requirement, syntax highlighting for multiple languages, and more.

TextMate also works with Xcode and can build Xcode projects. One of the best things about TextMate is that it comes with extensive documentation and video library which should easily get users started. If you want a no-nonsense text editor, TextMate is the one for you.

Just like Textastic, CodeRunner 2 is a very affordable text editor which has been specifically designed for Macs. CodeRunner 2 supports a large number of languages and delivers big IDE features while remaining lightweight and clutter-free. Some of its features include full-blown IDE-level code completion, support for 23 different languages, support for multi-file projects, breakpoints and debugging support, theme support, file and symbol navigator, automatic indentation support, intelligent bracket matching, and more. CodeRunner 2 brings a powerful text-editor in a simple to understand package which is good for beginners and experts alike. 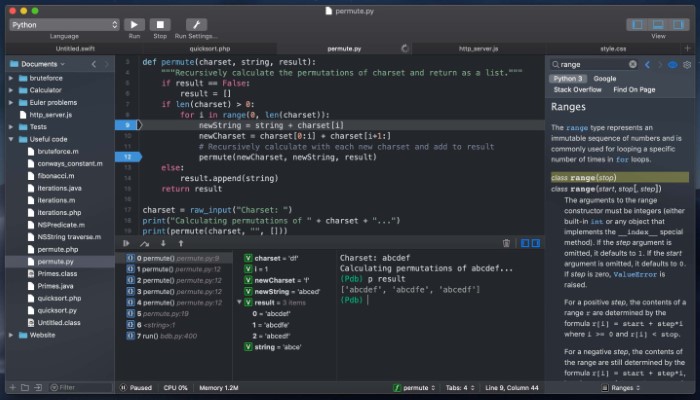