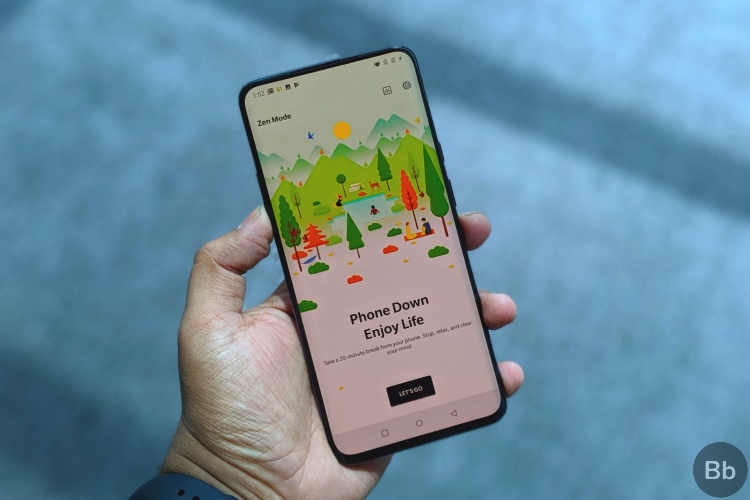 OnePlus introduced Zen Mode, its reply to Google’s Digital Wellbeing in Oxygen OS 9.5 which started rolling out along with the launch of OnePlus 7 Pro. While the feature is more strict and aggressive compared to similar offerings from Apple and Google by literally rendering the phone unusable for 20 minutes, the company has finally come up with reasons to justify how they ended up choosing this time limit.

According to the post on OnePlus forums, the company says that they have done research by studying user’s behavior and usage patterns. This involved collecting input from users by interacting with them to get feedback regarding how they use their smartphones on a daily basis.

OnePlus has chosen the time limit by considering a wide range of use cases from different kinds of users including parents, students, business people, people on vacations and so on.

The reason they avoided choosing 45 minutes or 60 minutes is that these long time intervals have their own advantages and disadvantages. While 60 minutes off the phone could help people focus on their real lives, that might result in missing out on important messages or meeting notifications.

That is when they considered experimenting with short time durations like 5 minutes, 10 minutes, and 15 minutes. 5 and 10 minutes options felt too short which led them to shortlist 15 and 20 minutes.

After a while of internal testing, OnePlus found that 20 minutes produced better results to positively disconnect people from their smartphones. They have also mentioned that having 20 minutes as the time limit encouraged people to try out the feature and resulted in people using the feature more often.

They also clarified why the camera is left accessible on Zen Mode. “Our thought was that with Zen Mode, you will be focusing your attention on something else. And that ‘something else’ could easily be a walk in a new city, enjoying time on the beach, in a garden. Not only might you be doing something different, but you’ll also be experiencing it differently, and seeing it from a new perspective, which you may want to remember and treasure.​”, reads their post.

The company also hinted its plans to let users choose the time intervals in a later update. Also, the team behind Zen Mode is considering to add an option to cancel Zen Mode at any point in order to avoid getting accidentally locked out of one’s smartphone.

So, do you use Zen Mode on your OnePlus device? Let us know in the comments.