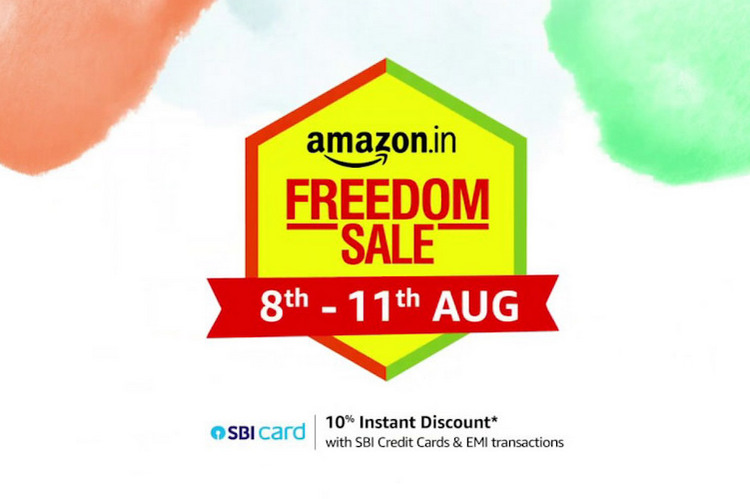 Amazon has announced that the latest edition of its ‘Amazon Freedom Sale’ will run from midnight on August 8 to 11:59 pm on August 11, 2019. The four-day event will bring various deals and discounts from sellers across all major categories, including smartphones, electronics, fashion, large appliances, TVs, daily essentials and more. As usual, Prime members will get early access to the sale, starting at 12 PM (Noon) on August 07, 2019.

In an official press release, Amazon said that during the promo period, customers will be offered great deals across a whole bunch of popular brands, including OnePlus, Apple, Samsung, Oppo, Xiaomi, HP, JBL, Bose, Sony, LG, BPL, TCL, Bosch, Whirlpool, Voltas and more. Customers will also get up to Rs. 5,000 off on Amazon Echo devices, Fire TV Stick and Kindle e-readers, said the company.

Some of the smartphones that will be available under offer include the all-new OnePlus 7 Pro, Samsung Galaxy M40, Samsung Galaxy Note 9, Oppo Reno, Oppo F11 Pro, Vivo V15 and the Oppo K3. The Huawei Y9 Prime will also be officially available for purchase for the first time in the country during the offer period. Mobile accessories like cables, power banks, cases will also be available starting at less than Rs. 100.

Alongside cash discounts and exchange offers, customers shopping during the Freedom Sale will also get an extra 10 percent instant discount with SBI Credit cards. There will also be no-cost EMI offers on more than 10 crore products with Bajaj Finserv EMI card, Amazon Pay ICICI Credit card and a few other select Debit and Credit Cards. Amazon Pay ICICI Bank credit card users will also get unlimited reward points when they shop during the Freedom Sale, said the company.

You can check out all the offers, deals and discounts on Amazon.