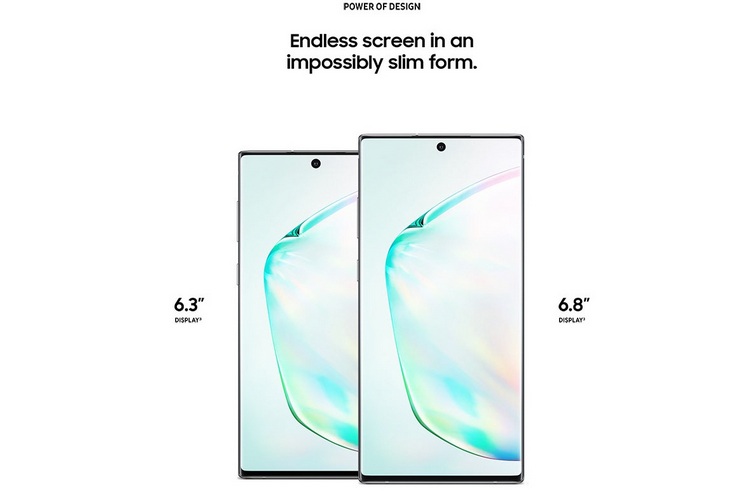 A few hours ahead of the unveiling of the Galaxy Note 10 and Note 10+ in New York City, some more renders of the device have leaked out online, confirming, yet again, some of its key features. Originally posted by Droid-Life, some of the leaked marketing material also highlights some of the key features of the updated S-Pen that supports air-gestures, among other new features.

For starters, Samsung is describing its next-gen flagship phablet as an ‘all-in-one device’ that functions as a computer, a gaming console, a film studio and an intelligent pen. The leaks also highlight that the Note 10 and the Note 10+ have an ‘endless screen in an impossibly slim form-factor’. As can be seen, the leak also confirms that they will feature 6.3-inch and 6.8-inch ‘immersive, nearly bezel-less cinematic displays’, respectively.

As for the S-Pen, the company is describing it as a ‘magic wand for your smartphone’, thanks to its enhanced functionalities, including air gestures, remote photos and handwriting-to-text. While the exact gestures will likely only be announced at the event, the ‘remote photos’ feature will enable users to snap images and switch between cameras by using the shutter-button on the stylus.

The Galaxy Note 10 and Note 10+ will be launched in just a few short hours from now in New York. While the former is rumoured to be priced starting at $949 in the US, the latter is expected to be priced from $1,099. While their Indian pricing is yet to be known, recent rumours suggest that will be launched in the country on August 20. You can watch the live stream later today at 4 PM ET / 1 PM PT in the US and 1:30 AM IST (August 8) in India.