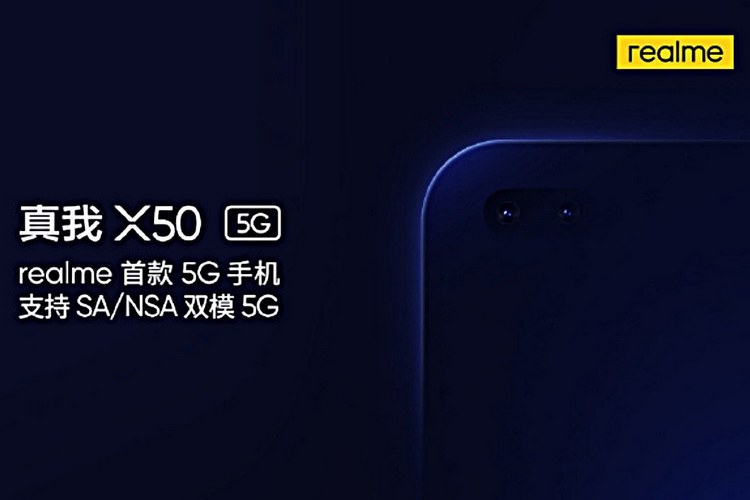 A couple of months after Realme CEO, Madhav Sheth, confirmed plans to launch 5G smartphones by the end of the year, the company has officially started teasing what would be its first 5G smartphone, the Realme X50. The name of the device was confirmed Monday by the CMO of the company’s Chinese operations, Xu Qi Chase, who announced on Weibo that the phone would be launched in China in the coming weeks.

As can be seen in the image above, the teaser, posted by Chase, has the silhouette of a phone with two cameras seemingly housed in an elliptical punch-hole design, which hints at a dual selfie-cam setup. Even more noteworthy is the confirmation that it would support dual-mode (SA / NSA) 5G connectivity, which is seemingly becoming the norm going into 2020.

There’s no more info on the upcoming device at this point, but we will, no doubt, hear more about it in the days ahead. It will be interesting to see if the X50 was, indeed, the phone that the company had in mind when it announced plans to launch a dual-mode 5G handset this year powered by an unannounced Snapdragon 700-series processor.

In that case, we can expect the Realme X50 to be powered by the much-rumored Snapdragon 735 SoC, which is said to be the first non-flagship Qualcomm processor to offer 5G connectivity. Meanwhile, we don’t have an exact launch date for either the Realme X50 or the Redmi K30, but it will definitely be interesting to see their positioning in the market, given that both devices are set to debut with dual-mode 5G support in the next few weeks.