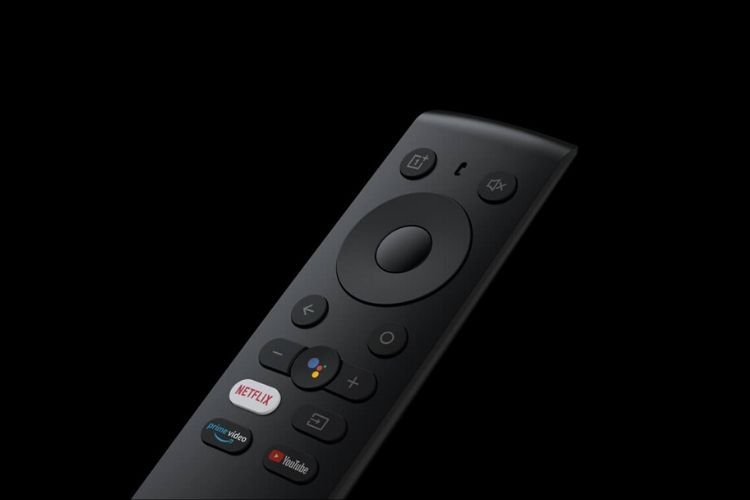 OnePlus TV recently bagged an update that brought along support for the Netflix app in tow. This update was much-awaited as it finally allows you to stream Netflix (which will now show up as a pre-installed app) on your OnePlus TV. But what’s even better is that OnePlus has launched a new much-improved remote control alongside this update.

Remember the sleek OnePlus TV remote that caught everyone’s attention at first, but is known to be super irritating to use. It had an unergonomic design, lacked a mute button and a volume rocker on the edge. The Chinese giant appears to have taken into account the widespread reports and launched a new remote control.

Dubbed the Netflix Remote, the new remote control has a more traditional design. It has the OnePlus (long-press to switch off TV) and mute buttons at the very top. Then, you’ll find the D-Pad, along with the back and home buttons, followed by the volume keys and dedicated Google Assistant button. Now, this is a much-better volume button placement.

Finally, OnePlus has added dedicated keys for Netflix, Prime Video, YouTube, and inputs. These buttons will make it simpler for users to access all of these pre-installed apps and start watching your favorite content. I did like the sleek build of the original OnePlus TV remote but this new remote seems to offer a more welcoming and complete experience.

How to Get New OnePlus TV Remote for Free

OnePlus initially shipped its Android TV with the original sleek remote, but now plans to switch them out for the “Netflix Remote” in orders shipping in the coming weeks. Going forward, the TV also would come with the Netflix app pre-installed out-of-the-box.

Now, if you own a OnePlus TV and want to get the new remote control then don’t worry, you can get it for free. You don’t have to pay anything extra and just need to follow the steps listed below:

2. Sign in to your OnePlus account and verify your OnePlus TV under the “Devices” section, which you can access using this link right here. You will then need to enter the serial number you retrieved in the first step here.

3. Once you have verified your OnePlus TV, you will receive the “Invitation Code” for the new Netflix Remote. You can redeem it to get the free remote delivered to you within around 5 days.

OnePlus is one such company that relies heavily on community feedback and the Netflix remote, which accompanies the new update, is a testament of the same.