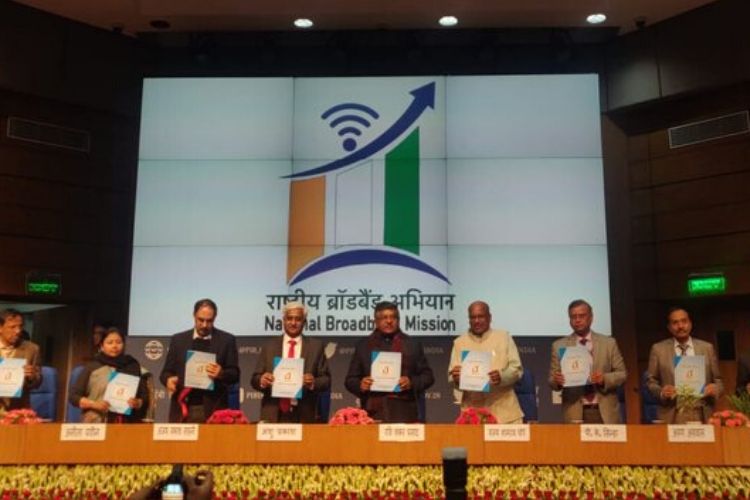 India has been making strides to become a digital economy over the past few years. We have seen mobile subscribers grow to 117 crores, with around 10GB Internet data being consumed on average today. Now, the central government aims to further digitization in India and bring ‘affordable and universal’ Internet access to every corner with the launch of the National Broadband Mission.

The mission, abbreviated to NBM, was launched by Union Telecom Minister Ravi Shankar Prasad, as part of the National Digital Communications Policy 2018, as reported by IANS. It’s going to help “fast track growth of digital communications infrastructure, bridge the digital divide, facilitate digital empowerment and inclusion, and provide affordable and universal access of broadband for all,” reads the official press release.

The government has now prioritized bringing broadband access to all villages in the next three years, around 2022. “Through the National Broadband Mission, we aim to provide broadband to all villages, increase mobile towers to 10 lakh, ensure 50 Mbps speed and increase mobile tower fiberization to 70%,” stated Mr. Prasad during the announcement. Earlier, we have seen well-known tech giant Google work towards providing high-quality internet coverage to Indian villages, towns, and cities – opening the digital floodgates to them.

The project is assumed to see an investment of Rs. 7 lakh crores, coming from both the government and private sectors together in the next 3 to 4 years. Universal Service Obligation Fund (USOF) will contribute 10% of the funds whereas the balance will come from towers and assets of private players.

Apart from affordable broadband access, the mission will also focus on objectives listed right here – (1) grow optical fiber route from 22 lakh km to 50 lakh km; (2) increase in mobile towers from 5.65 lakh today to 10 lakh by 2024, and (3) significantly improved quality of mobile and Internet in the country. 12 Indian states have already joined the government’s mission while others are expected to onboard in the coming months.

National Broadband Mission will promote digital entrepreneurship in India and enable the growth of digital services in rural regions. It will indirectly contribute to the ‘Digital India’ mission, ensuring the creation and delivery of low-cost, homegrown digital services. The larger objective, however, is to propel India towards a ‘5 trillion dollar economy’ because our nation has extraordinary potential for business, said Mr. Prasad during the launch.