One of the most underrated features of a smartphone is the ability to record voice calls. While some of the OEMs like OnePlus, Xiaomi, and Huawei make sure to include this feature on their build of Android, the feature cannot be found natively on Android. For me, call recording is a very important feature, as it helps me save important conversations that I might want to refer later. It also makes it easier for me to discuss my ideas with colleagues on calls, as I know that everything that we brainstormed on, is safely saved on my phone. If for these reasons or reasons of your own, you need to record calls on your Android device, there are some really good apps present on the Play Store which let you do just that:

Note: Since most of the apps on the list share an almost similar name, be sure to download the apps from the provided links only. Also, call recording is illegal in some countries, like the US, so remember to check your country’s status before you download and use any of these apps. 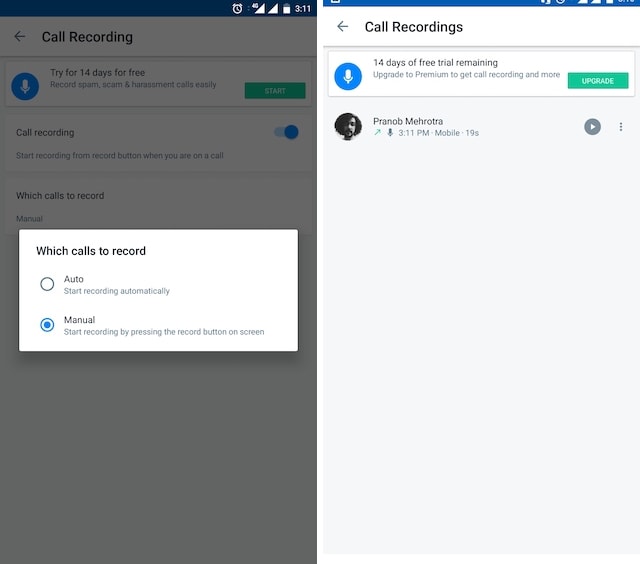 However, before you decide to pay for the feature, you can use the 14-day free trial to check it out. The free trial is very important as not all Android devices are supported. You will have to install and use the app to see if your phone is supported or not. You can check out our article on how to use Truecaller to record calls which also includes a list of verified supported and unsupported devices. I tested the call recording feature on my OnePlus 3 and it worked flawlessly. I had one of the best call recording experience, and hence, I highly recommend this app to anyone looking to record calls on their Android device.

Automatic Call Recorder is one of the best call recording apps which you can currently download and use. I used the app on a couple of different devices and it worked flawlessly on all of them. The app lets you record any number of calls. It also gives you three different modes for automatically record your calls. You can either record all calls, record calls only for saved contacts, or record calls for numbers which are not saved in your contacts. 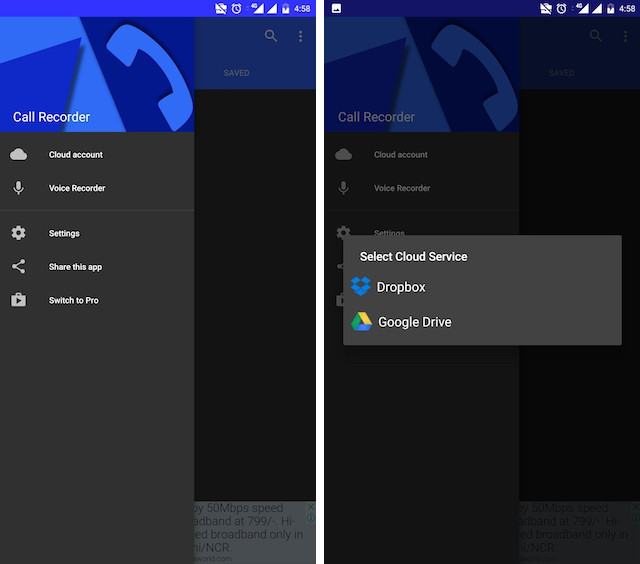 The app also has a decent integration with DropBox and Google Drive, so you don’t have to worry about running out of space on your smartphone. To top it all of, it also has a beautiful dark mode. You can either use the free version of the app with ads, or buy the pro version which removes the ads completely.

Cube Call Recorder ACR is the only app on this list that not only lets you record your normal phone calls, but also the calls from various VoIP services including Skype, Viber, WhatsApp, Hangouts, Facebook, IMO, Line, Slack, Telegram, and more. That said, VoIP call recording is not supported on all devices, hence, you will have to install the app to see if the feature is working on your device or not. The best part about this app is that it’s completely free to use and doesn’t have any ads inside. With Cube Call Recorder ACR, you are getting one of the best call recording experiences for completely free. 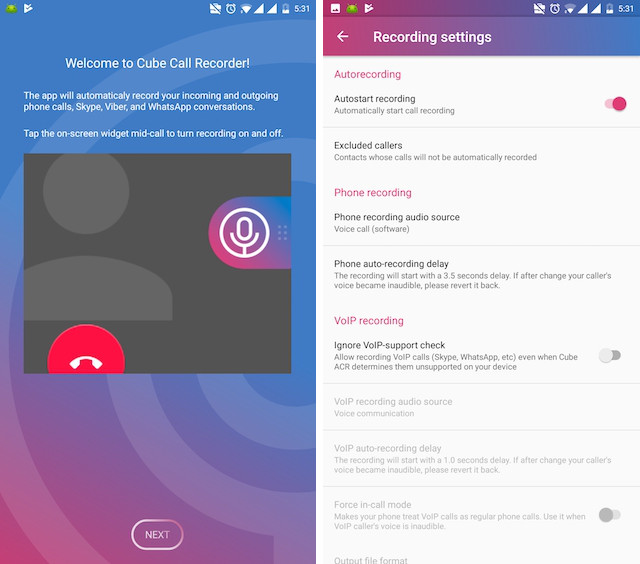 Call Recorder – ACR is another great app which worked on almost all the devices that I tested it on. Just like Automatic Call Recorder, the app can track your incoming and outgoing calls and record them without you having to do anything. The best part about using this app is that it’s one of those apps that just work. The app also supports multiple cloud storages including Dropbox, Google Drive, OneDrive, FTP, and WebDAV. Not only that, the app even allows you to directly send the recorded calls to an email of your choice. You can use the app for free with ads, or buy the pro version to remove all the ads. 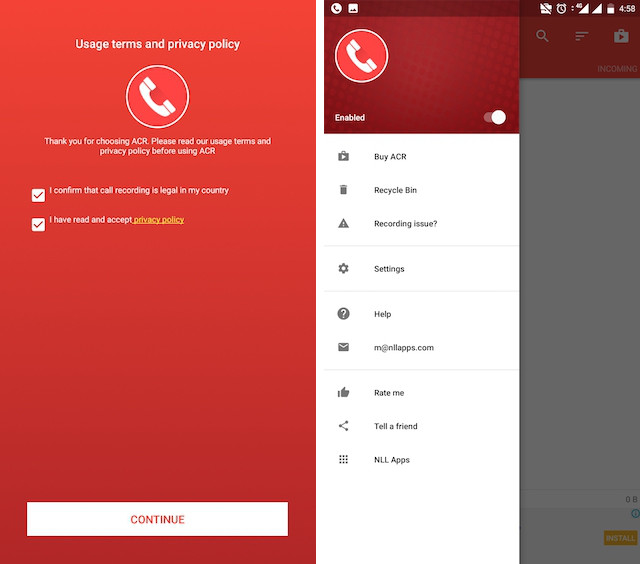 Call recorder by TOHsoft Co. is one of the most feature-rich call recorder apps on this list. Not only the app allows you to record both incoming and outgoing calls, it also helps to organize the recorded calls. You can also add numbers to exclude them from the call recording list. My favorite feature of this app is that it allows you to password protect your calls, so you know that your conversations are safe even if you lose your phone. It’s one of the best call recording apps available on the Play Store. 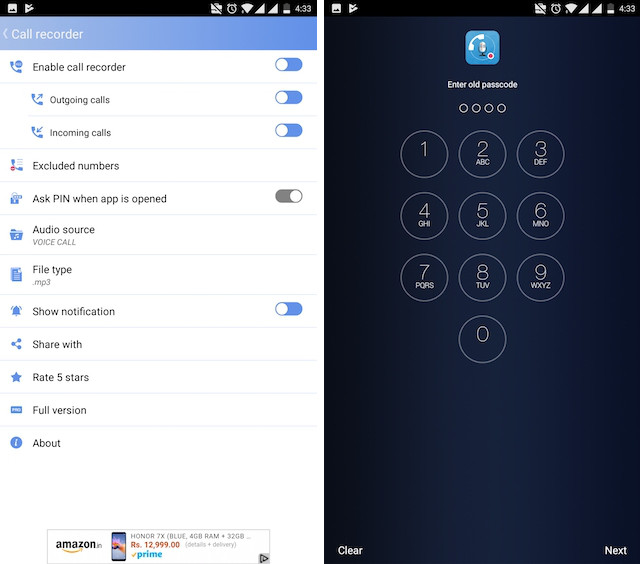 Call Recorder by Quality Apps is almost similar to Call Recorder – 2017 when it comes to features. The app lets you record both incoming and outgoing calls, search inside the recorded calls, mark important calls as favorites, set a PIN to protect your calls, save calls in either MP3 or WAV format, and more. The app is free to use with ads. However, you can buy the pro version to remove the ads. 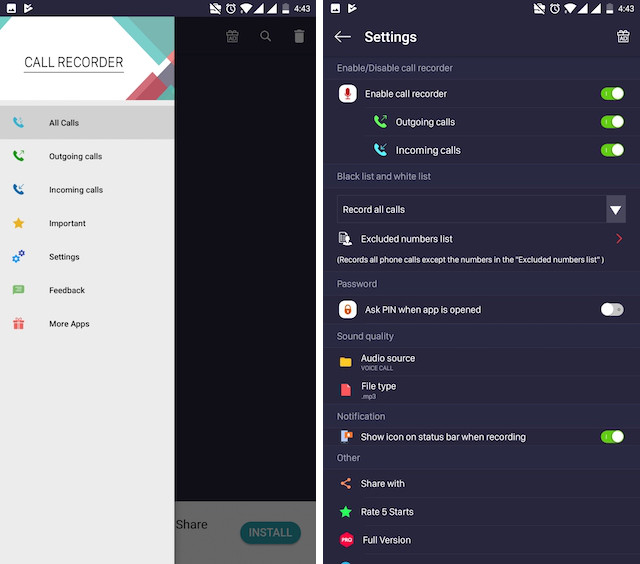 RMC: Android Call Recorder is one of the most versatile call recorder apps on the Play Store. Not only the app lets you record voice calls in MP3 and WAV formats, it also supports other formats like AMR, MP4, and 3GP. The app automatically records all the incoming and outgoing calls and lets you sort and search the call logs. It also has a built-in trash folder which removes the fear of accidental deletion of saved calls. You can also customize various things like recording channels (select between mono and stereo), sample rate, and bit rate. It also supports cloud integration with Dropbox and Google Drive. The app is completely free and is supported with ads. 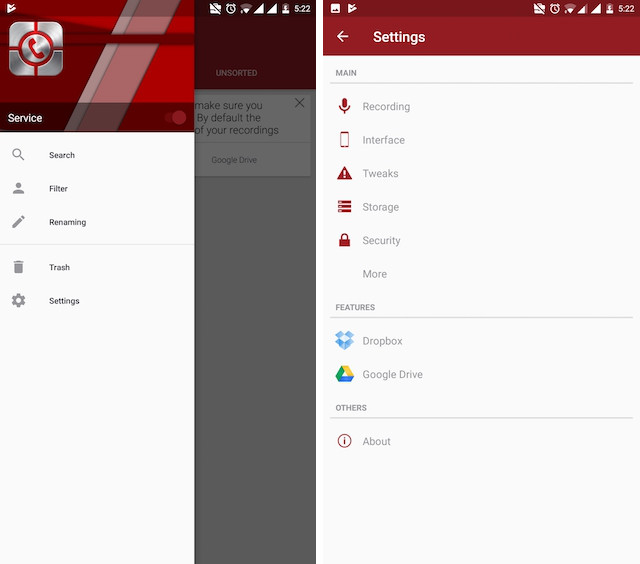 With an average rating of 4.6 on the Play Store, Call Recorder By Recorder & Smart Apps is one of the most popular call recording apps on the Play Store and rightly so. The app records and organizes all your outgoing and incoming calls. You can either set the app to automatically save the calls or ask you every time when a call ends. The “ask to save” feature helps in reducing the number of calls saved on your phone and ensures that only those calls are saved which are important. Although it doesn’t support cloud storages, it does allow you share recorded calls via Dropbox, Google, Skype, and more. The app is free to use with ads. There is a pro version which removes the ads completely. 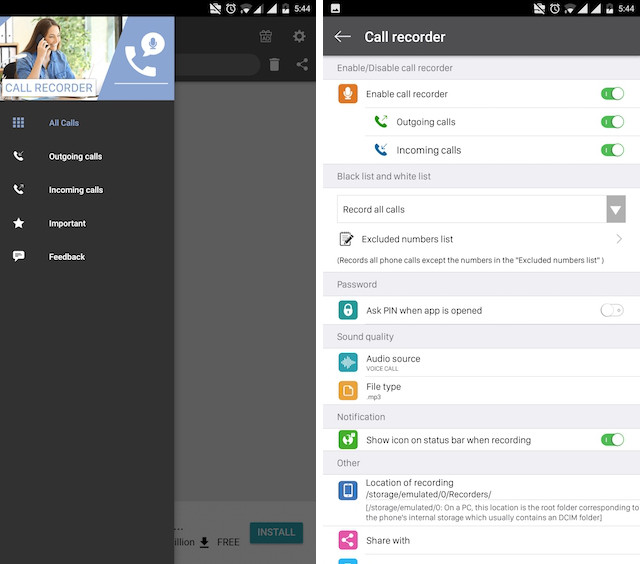 Call Recorder by Lovekara is a free call recording app which you can use to automatically record your calls. The app lets you save all of your recorded calls in MP3 format. You can either save the calls on your phone, or you can transfer them to an external SD card if your phone supports it. However, there is no cloud integration. Also, the app is supported by ads and there is no paid version to remove the ads. Still, the app is good at what it is supposed to do and is totally free, so there’s not much to complain. 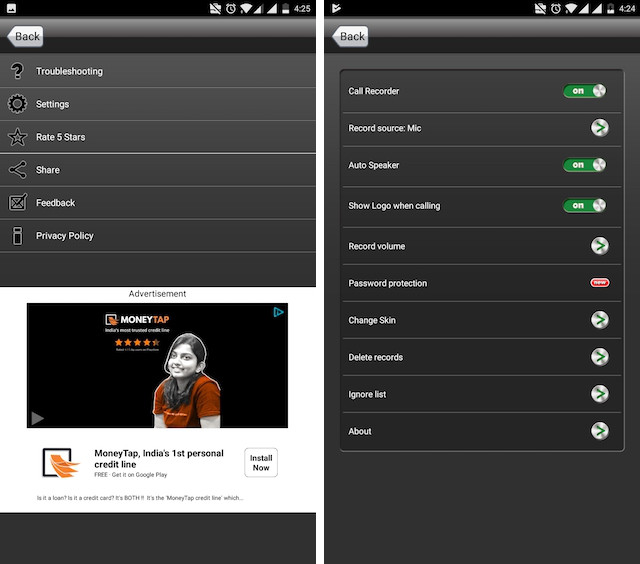 This is yet another call recorder app for your Android device. It’s one of the simpler apps on the list and packs only the basic functions. The app lets you record incoming and outgoing calls and has an integrated audio player which you can use to play your recordings. Extra features like searching and sorting, cloud storages support, and moving files to SD card are not supported. If you are looking for a lean and light app to record your phone calls, this is the one to get. 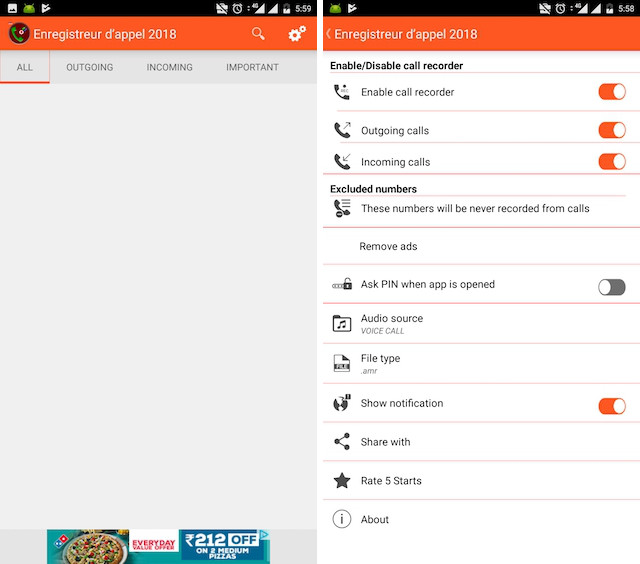 You never know when that moment will arrive when you will curse yourself for not having a call recording function on your smartphone. Since most of the apps mentioned on this list offer a free service (supported with ads), it won’t do you any harm to test these apps out and keep the one which works on your device. Conversely, if you are already using such an app which works great for you and is not on the list, do share with us by dropping its name down in the comments section below.