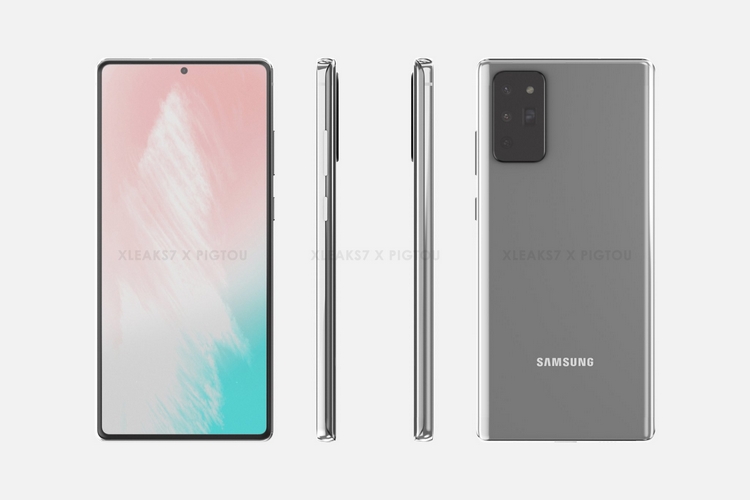 The first renders of Samsung’s upcoming Galaxy Note 20 have now leaked online. The renders have been leaked by Pigtou in collaboration with David from xleaks7. The leak comes merely a few days after news about Samsung’s plans to unveil the Galaxy Note 20 series in a virtual event surfaced online.

From the looks of it, the alleged render of the Galaxy Note 20 resembles the Galaxy S20 Ultra. In terms of design, the renders suggest that the Galaxy Note 20 will feature relatively flat design at the front and curved edges at the rear. The handset reportedly measures 161.8 x 75.3 x 8.5 mm, accounting for a 6.7-inch display.

The camera setup features a periscope lens just like the Galaxy 20 Ultra but this time around, it will be placed alongside other lenses. However, the report mentions that Samsung is still working on the camera setup, and hence, we will have to wait to know the exact configurations of lenses.

At the bottom portion, there’s a USB-C port as you would expect but the S-Pen’s slot has been moved to the other side. The S-Pen slot is usually on the right but on these renders, it is seen to the left bottom corner.

With all that said, since we can’t verify the credibility of these leaks just yet, we would recommend you take this information with a grain of salt.

Samsung is expected to make an official announcement of the Galaxy Note 20 series sometime in August. We will be updating you when that happens, so stay tuned for more updates.