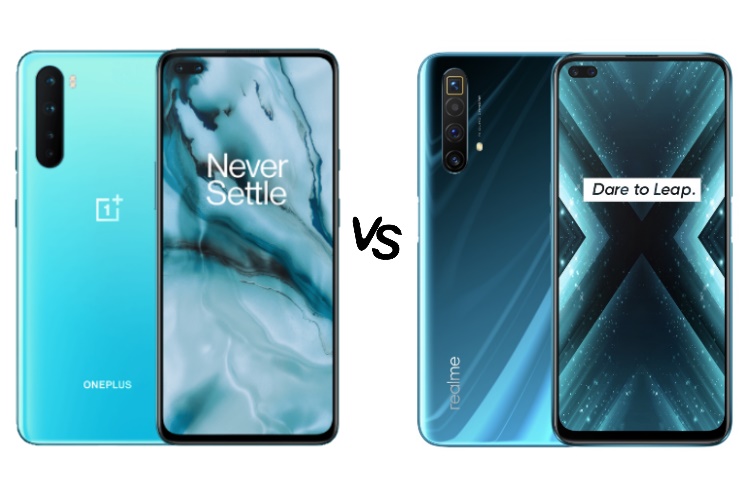 The much-awaited mid-ranger from OnePlus finally made its debut earlier this month. The OnePlus Nord marks the Chinese giant’s return to the mid-range segment after 5 years. It’s a premium and feature-packed smartphone that’s powered by a 5G chipset, 48MP quad-cameras, dual punch-hole selfie camera, and 30W fast-charging. It’s been priced starting at Rs. 24,999 in India and rivals its sister company  – Realme’s budget flagship – Realme X3 and Realme X3 SuperZoom in the same price bracket.

As the title should already tell you, the OnePlus Nord and Realme X3 SuperZoom are very similar-looking phones. Both of them have a similar-sized display with a dual-camera punch-hole at the top left. The vertical quad-camera array (yeah, both have four cameras) on the rear is also placed at the same location – the left edge. Even the speaker, SIM tray, and USB Type-C port placement at the bottom are also the same. 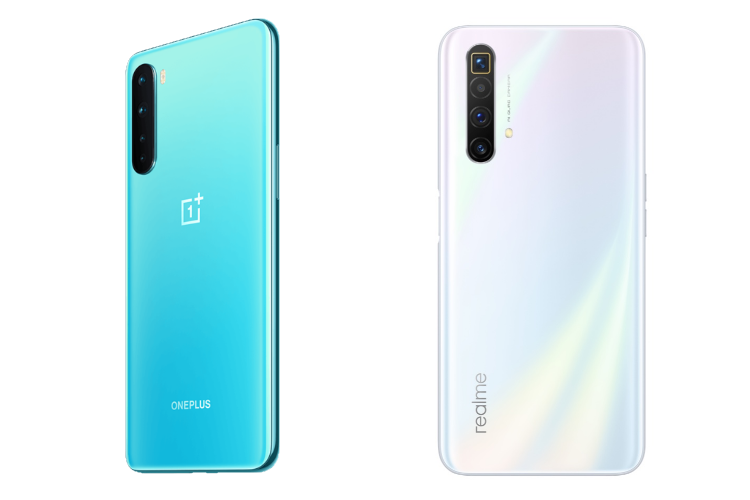 It’s just that the Realme X3 SuperZoom has gone with a more flashy gradient back panel whereas OnePlus Nord picks solid colors — Gray and Blue. When kept next to each other, you might not be able to tell the difference between the two from the front – not until you turn on the display.

This is one department that may spark a debate among enthusiasts but since both the phones are offering a high refresh rate, the deciding factor will obviously be the panel type, as well as quality.

Here, the 90Hz and 120Hz refresh rate will offer almost the same fluid experience but we know that AMOLED screens offer punchy colors and deeper blacks. The brightness and sunlight legibility of this panel is also better than the IPS LCD aboard the Realme X3 SuperZoom.

The biggest difference between the OnePlus Nord and Realme X3 Superzoom lies under the hood. The former is powered by the latest 5G-enabled Snapdragon 765G chipset whereas the latter has last year’s flagship Snapdragon 855+ chipset running the show. This means Nord supports 5G connectivity (not even available in India) while the Realme X3 Superzoom does not.

The base variant of the Realme X3 SuperZoom comes with 6GB RAM and goes up to 8GB while the OnePlus Nord’s base variant offers 8GB RAM for the same price. The higher-end Nord variant includes 12GB of RAM. Both are equipped with LPDDR4x RAM, which is okay at this price point. OnePlus Nord cuts corners on the storage front though. It offers up to 256GB UFS 2.1 storage while Realme X3 SuperZoom includes up to 256GB UFS 3.0 storage.

Both phones include a USB Type-C port for charging and data transfer. The 3.5mm headphone jack is missing in action for both OnePlus Nord and Realme X3 Superzoom. Also, both phones do not have an official IP rating.

This is ultimately going to boil down to preference but we believe there’s a lot of stock Android enthusiasts out there. OnePlus’ own OxygenOS offers a clean and minimal UI that’s closer to the stock experience. You also get the goodness of add-on features, like Zen mode, screen recording, parallel apps, and more. The biggest benefit, however, is the fluid and bloat-free experience. The company has now even swapped out its stock dialer and messages app for Google’s apps.

Realme UI, on the other hand, is a massive improvement over ColorOS 6. You’ve now got a slimmed-down UI, with colorful new icons and fluid animations. It even offers a ton of new features, including privacy protection, partial screenshot, and more, out-of-the-box. You can check out some cool Realme UI features right here. Which among the two – Realme UI and OxygenOS – do you prefer? And why? Tell us in the comments below.

Moving on to the cameras, both the OnePlus Nord and Realme X3 Superzoom boast a quad-rear and dual-selfie camera setup. On the front, the dual-cam punch-hole selfie camera is the same aboard both phones. You get a primary 32MP camera and a secondary 8MP ultra-wide camera with a 105-degree FOV. It makes it really easy to click group selfies.

The higher megapixels count is okay but the thing that makes the biggest difference here is that Realme X3 is capable of recording 4K videos @ 60FPS. Snapdragon 765G aboard the OnePlus Nord limits video capture to 4K @ 30FPS but it does have OIS + EIS support. The Realme X3 SuperZoom only supports EIS. You can choose to save a couple of thousand bucks with the standard Realme X3 with a simple telephoto lens and 2x optical zoom.

Overall though, the presence of a periscope camera aboard the Realme X3 Superzoom makes it a little more versatile over the OnePlus Nord. You do get a software-based 2x zoom in OnePlus phones but it cannot match up to optical zoom.

There isn’t really a lot to talk on the battery front here. OnePlus Nord comes packed with a slightly smaller 4,115mAh battery as compared to the 4,200mAh battery pack aboard the Realme X4. Both of these phones support 30W fast-charging — just under different names. Overall, I would say there should not be a huge difference in the battery usage of these phones.

Which Phone Would You Buy?

The answer to this question is not that simple. If you purely go by the specs sheet and are looking for raw performance, then the Snapdragon 855+ aboard the Realme X3 SuperZoom will surely deliver on this promise. You get a similar quad-camera, dual selfie camera, and 30W fast-charging experience as the OnePlus Nord.

The 120Hz IPS LCD display will, however, be a drawback in comparison to the 90Hz AMOLED display aboard the OnePlus Nord, as I’ve explained above. It also includes a pretty powerful Snapdragon 765G chipset and brings 5G support in tow – making the device future-proof. The same, however, cannot be said for the Realme X3 SuperZoom. So, which phone would you buy? Let us know your pick in the comments below.