Google Docs has become one of the most-used word processors on the market. There are two big benefits of using Google Docs. First, you can use it for free — forever. And secondly, Google Docs is still the king when it comes to online collaboration. That being said, people who have been using Microsoft Word for a long time might find it a bit difficult to adjust to Google Docs’ UI. So, in this article, I am going to show how you can Strikethrough text in Google Docs, along with other formatting options.

While Google Docs might seem a bit unfamiliar, once you start using it, you can easily figure out everything in a few days if not hours. I find it easier to use than most word processors like Microsoft Word. And while it’s not as feature-rich, it has got all the basics covered. With that said, let’s get into our tutorial, shall we?

1. Select the text that you want to strikethrough and click on “Format”. 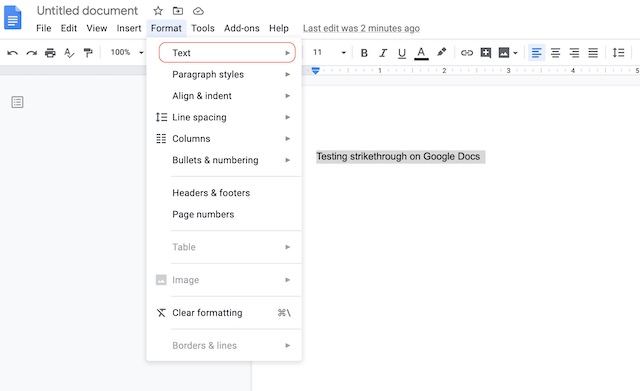 2. Now, hover over the “Text” option and click on “Strikethrough”. 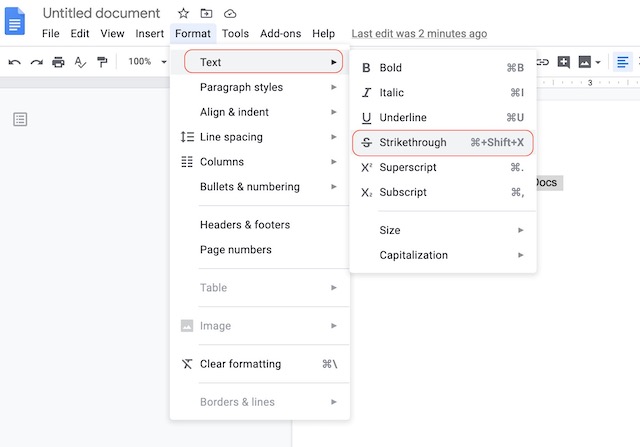 3. That’s it. You have now applied strikethrough on the selected text as shown below.

4. If you want to make it faster, remember the below keyboard shortcut for applying strikethrough:

Other Formatting Shortcuts for Google Docs

Whenever you forget a keyboard shortcut, you can use the same “Format” menu to apply the required style to your text. That said, it will be a lot easier if you remember some of the most commonly used keyboard shortcuts. Most of them are similar to the ones on Microsoft Word, so you should not have any problems.

Those are some of the commonly used shortcuts that I think will help you a lot. If you want to learn all the relevant keyboard shortcuts, head over to Google’s documentation on the same.

Google Docs has changed the way we use word processors. Instead of bringing a plethora of features that 90% of people will never use, it brings a clean writing experience that makes everything easier. Yes, it might take you a few days to get acclimated to the software, but that’s worth it. Do you use Google Docs? Let us know in the comments below.