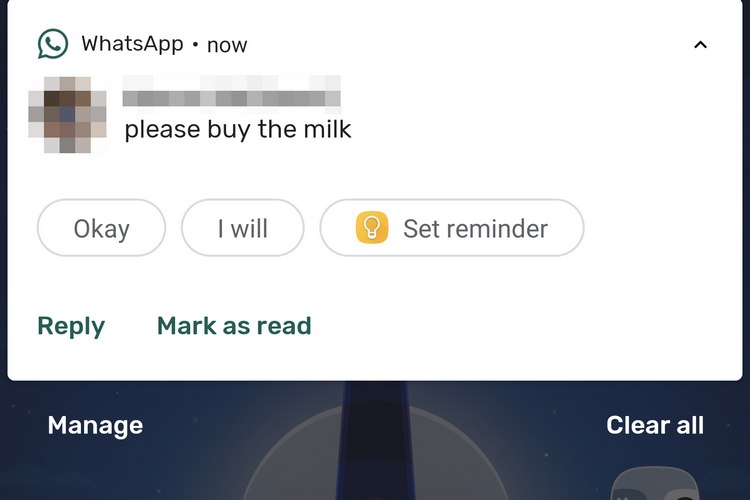 Google has been gradually improving contextual actions over the years on Android. In its latest attempt, the company has started testing the ability to set reminders right from the notifications shade. Whenever a contact sends you a message that has a call to action, the operating system will show you a neat “Set reminder” button next to smart reply suggestions.

Interestingly, the title of the reminder will get automatically filled with the message’s content. This way, you will not have to manually enter the details for confirming the reminder.

It is worth noting that the feature mostly works with WhatsApp and Telegram notifications for now. While it is said to work with sentences like “don’t forget x” or “please buy x” or “bring x”, Android Police reports that the AI tends to get confused when there’s an exclamation mark at the end of the message.

According to the report, in one instance, the app showed a Google Keep reminder button. Fortunately, Google Keep is not the only reminder app that supports this feature. If you have multiple productivity apps installed, the feature will prompt you to pick the one that you use the most. For now, the feature is confirmed to work with Google Keep and Tasks.

The experience you get with Keep and Tasks is not similar, though. While reminders from Keep syncs to Google Assistant and Calendar, it doesn’t behave the same way on Tasks. Also, the Tasks app saves the reminder with an auto-filled date, which requires further manual editing.

From what it looks like, Google is not rolling out smart action reminders widely. It is likely to be limited to Pixel phones at this moment. Moreover, we don’t know when Google has planned to make this available to the masses.