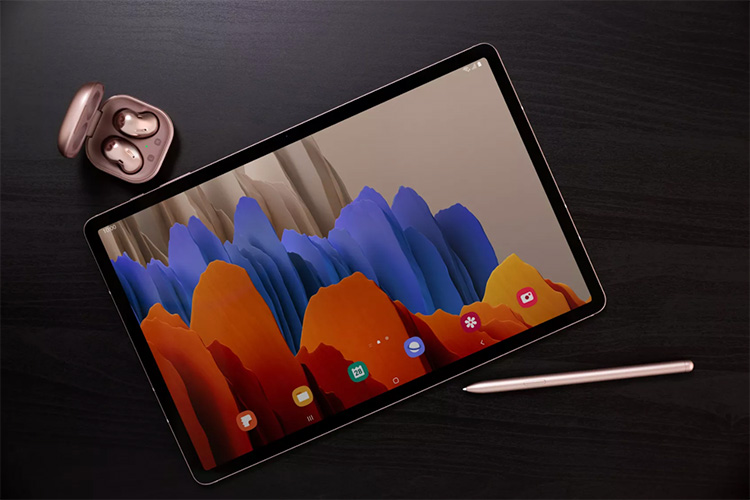 At the Galaxy Unpacked event, Samsung has finally launched the new Galaxy Tab S7 and S7 Plus. The tablets were launched alongside the new Galaxy Note 20 series, Galaxy Watch 3, and Galaxy Buds Live, and as expected, Samsung is putting in powerful hardware here and is aiming for both media consumption and productivity use cases.

Under the hood, there is a Snapdragon 865 Plus processor paired with 6GB or 8GB RAM, and up to 256GB storage. Also available is a microSD card slot to expand storage if you need to. There’s 5G on board here as well, if you choose to go with the cellular version of the tablets, and they support both mmWave and sub-6GHz 5G networks.

In terms of cameras, the tablets come with a 13MP + 5MP ultrawide dual rear camera, and an 8MP shooter on the front.

With all that power, you will need chunky batteries, and the Tab S7 seems to be well prepared for that. The smaller Tab S7 comes with an 8,000mAh battery while the Tab S7 Plus comes with a 10,090mAh battery. Both the tablets support 45W fast charging via the USB C port.

The tablets run Android 10 with Samsung’s One UI on top and they come with support for Samsung DeX as well, just in case you want to use them more like laptops than tablets. Speaking of using the new Tab S7 and S7 Plus as laptops, you can get first party keyboard covers for these. The keyboard case for the Tab S7 is priced at $199.99 and you’ll shell out $229.99 for the Tab S7 Plus’ keyboard case.