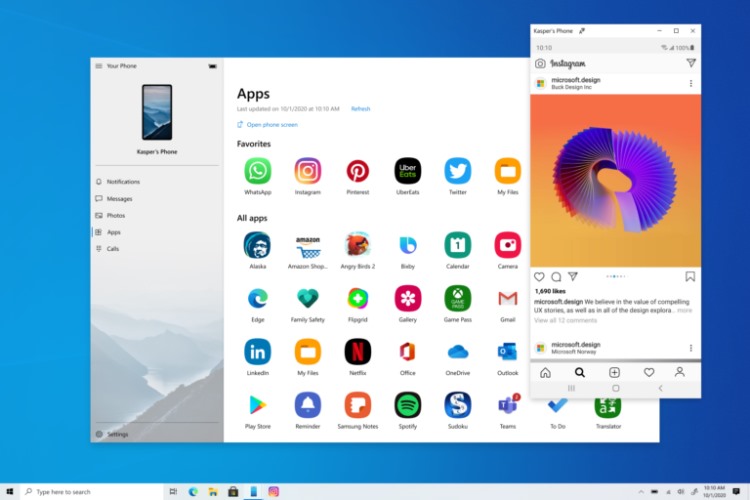 Microsoft has slowly been bulking up the features set of the super handy Your Phone app on Windows PC. It is no longer just for seeing your phone’s notifications and can be used to place/ take calls, control music playback, and a lot more. The latest feature addition has to be one of the most useful to date though. Microsoft now enables users to open Android apps from their phones on their Windows PC – without the need for installation or anything.

Called the Your Phone Apps experience, this feature is already rolling out to Windows Insiders in the Dev, Beta, or Release Preview Channels. It allows you to see a list of all Android apps on your phone, pin your favorite ones, and launch them with just a click. The app will automatically update your favorites list based on your usage and you can search through the list as well.

Each app you open is mirrored from your Android phone and runs in a separate new window. It is not limited to use inside the Your Phone app. What’s even better is that “you can conveniently pin your favorite mobile apps to your Taskbar or Start menu on your PC for quick and easy access,” as per the official blog post. So, users can even Alt+Tab to cycle between your Windows and Android apps.

Sound great, right? There’s a huge limitation to this feature at the moment. You need to own a Samsung smartphone that supports the Phone screen feature in the Your Phone app on your Windows PC. This includes a myriad of Galaxy S, Note, and A-series phones. You can check out the list of compatible devices right here.

While the ability to access Android apps from your phone on your Windows 10 PC is great, you can currently access only one app at a time. This is another limitation but Microsoft plans to let users run multiple apps side-by-side in the coming months. You will be able to experience the same on the Galaxy Note 20 series really soon. The two tech giants are also working to port this feature to other Android smartphones.

Your Phone Apps experience does have its limitations though. Some apps may not run on your Windows PC due to the inability to cast to other screens. Other apps or games may not properly respond to your mouse and keyboard input or playback sound on the phone itself. Still, I believe it’s impressive how Microsoft is trying to close the platform divide and take on Apple’s walled garden in the process.